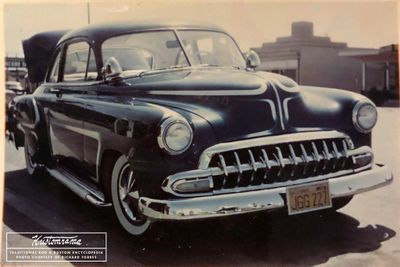 A photo of Richard's Chevrolet taken circa 1958, after Bill Hines had given it a scallop paint job in his dad's garage. This was not Bill Hines, the short guy with the cigar, but a name brother from Long Beach, California. Photo courtesy of Richard Torres. 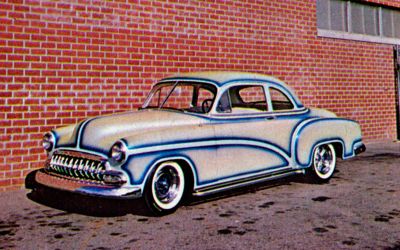 The Chevrolet as it appeared after Larry Watson repainted the car for Bill Haddad. 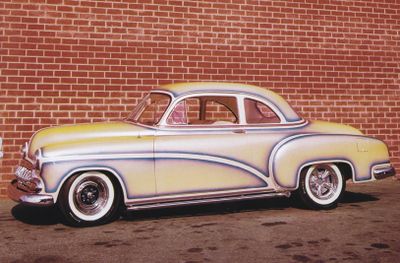 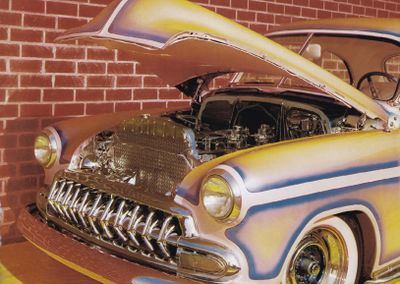 1951 Chevrolet originally owned and restyled by Richard Torres of Lawndale, California. Richard was attending the El Camino Jr College when he had the car, and he did not belong to any of the local car clubs. In 2019 Richard told Sondre Kvipt of Kustomrama that he had a lot of the body modifications done around 1957 - 1958. "I had the hood peaked, the rubber rear fender guards removed, the trunk lid handle removed, and the side pipes installed." All body seams were also filled, and it was dressed up with a 1954 Chevrolet grille bar and dual spotlights.[1]

Painted by the other Bill Hines

"It was painted a deep blue with white pearl scallops by Bill Hines who worked for Larry Watson." This is not Bill Hines, the short guy with the cigar from Michigan, but a name brother. "This paint job was done in Bill's dad garage in Long Beach. Bill was around 16-17 years old, and this was his second paint job."[1]

"I had the white with blue trim interior and trunk done in Mexicali, Mexico." Later on, Richard had Eddie Martinez redo the trunk when he was renting space from George Barris. "Eddie also made a tucked and rolled snap-on cover for under the hood, and a snap-on cover for the outside pipes." He also upholstered the inside of the glove box in tuck and roll, made rolled covers for the clutch and brake pedals, and rolled floor mat covers.[1]

According to Richard, his Chevrolet was the first car to have a set of reverse chrome rims installed; "They came from Gardena Plating in Gardena, California which became my sponsor. In return, I advertised the wheels for him." Later on, Torres had Hines paint it in a light blue pearl. The second paint job was done at Larry Watson's shop.[1]

In 1963 Richard's Chevrolet was featured in Popular Customs Winter Issue 1963. By then it was owned by Bill Haddad, who had had Larry Watson of Watson's House of Style give it a panel paint job with faded effects. Richard can't remember who he sold it to, but he believes it must have been Bill Haddad. According to the Popular Customs story, the most notable feature on Bill's Chevy was the Pearl White and faded Blue Watson panel paint job. The engine was stock Chevrolet except for solid lifters and an Iskenderian three-quarter cam. The exhaust was porcelain covered. The car had also been dressed up with perforated mesh in front of the radiator.[2]

Please get in touch with us at mail@kustomrama.com if you have additional information or photos to share about Richard Torres' 1951 Chevrolet.