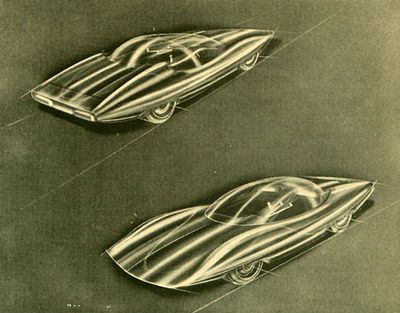 A sketch of the Space Coupe as it appeared in Popular Customs January 1966. 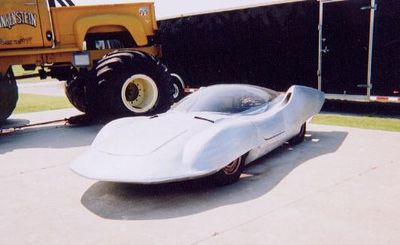 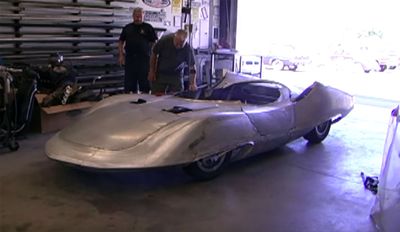 The Space Coupe at Outlaw Garage in July of 2017. 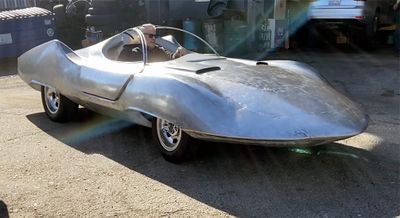 In February of 2021 the Space Coupe drove for the first time in the car's 58 year history.

The Space Coupe is a streamlined bubble top show car designed by Bill Cushenbery of Cushenbery Custom Shop. The car has also been known as "The Silhouette II Space Coupe". According to Barry Gremillion, the car got its "Silhouette II" name due to mistakes made in many magazine articles back in the days.[1]

Bill started working on the all aluminum Corvair powered car at his Monterey, California shop in 1963. In 1964 he moved to a new shop in North Hollywood, bringing the project along.[1]

Toward the end of 1964 Bill had a dispute with his financiers. He took elements of the car with him and moved to a new shop, thinking he would get the rest of the car back to finish once the dispute was settled.[1]

Bill's project was presented to the world in Popular Customs January 1966. In the story he refereed to the car as the "Scorpion." Bill said that the name may not stick as he felt it had too many unpleasant connotations. The car was described as another Cushenbery show stopper, a sleek little streamliner displaying a happy mixture of influences from Bonneville and sports car racing. By 1966 Bill had created an original chassis using two-by-four-inch rectangular tubing. The mechanical Corvair components had also been shuffled around a bit to fit within the vehicle's unusual configuration. Bill had also begun to build the aluminum body, and a model of the car was already on Revell's future model schedule.[2]

After Bill lost the car, it mysteriously went missing. It surfaced a couple of times in other shops in the 1960s, before it vanished completely. Bill tried to trace it down without luck, and in 1998 his hunt ended when he passed away.[1]

In late April 1999 Carl Green found the remains of the Space Coupe. The build was never completed, and he found it discarded among tall weeds on a property in El Cajon, California. The current owner was preparing to have it hauled off and crushed.[1]

Carl Green cleaned and patched the car up, and sent it to Oklahoma where it was displayed at Darryl Starbird’s Rod and Custom Hall of Fame Museum. Unable to raise enough funds to restore the car, it languished for another 8 years until he moved it back to Southern California in 2007.[1]

In 2008, Barry Gremillion, an old friend of Carl's, stepped in to finance the restoration, and began making a documentary about it called "The Cushenbery Project."[1]

Willie Newman, a renowned aluminum body many from New Zealand, worked for a few months on the car. He made great progress on the body and chassis while Jeff Williams at California Corvairs re-built the chromed engine and drivetrain.[1]

In December of 2008, the project took what was supposed to be a 2-week break so Carl could return to Kansas and Willie to New Zealand for holidays with family. The project was on target for completion by Spring 2009. Carl and Willie never returned, and a series of events unfolded that delayed the project for another 8 1/2 years. The car remained with Carl's nephew, Rodger Green, in storage in Nebraska until Carl passed away in late 2015.[1]

In July of 2017 Barry H Gremillion made a deal with Nelson Vels at Outlaw Garage, and the project was moved to his shop in Santa Clarita Valley.

Please get in touch with us at mail@kustomrama.com if you have additional information or photos to share about Bill Cushenbery's Space Coupe.