From Kustomrama
(Redirected from Amber Glow)
Jump to: navigation, search 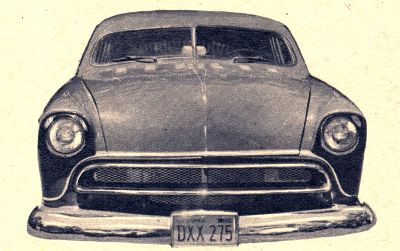 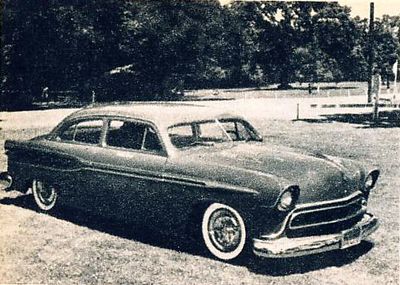 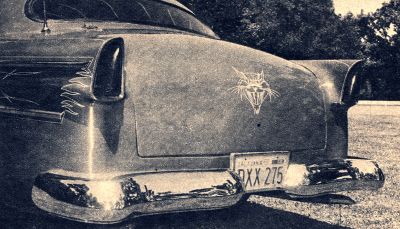 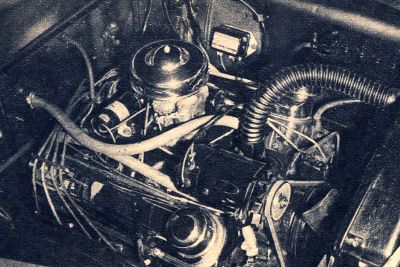 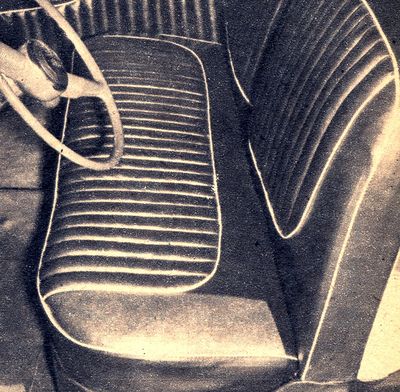 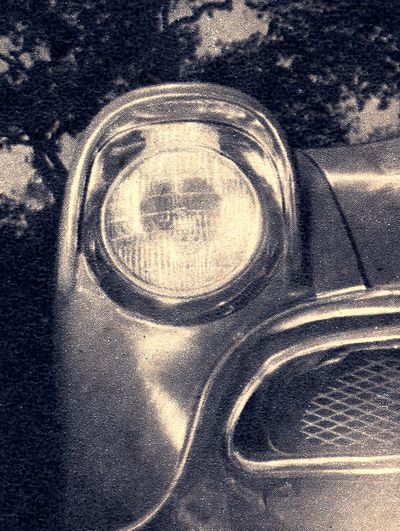 1950 Ford restyled by Cleary Motors for Mario Pirondini of Santa Rosa, California. Mario was a member of the Santa Rosa Street Angels Car Club. The car was also known as The Amber Glow.[1]

Cleary Motors chopped the top 4 inches in front and 6 inches in the rear. They also lowered the car an additional 6 inches by channeling the body over the frame. Up front the fenders were extended 4 inches in order to form headlight hoods. The edges of the hood were rounded off using 1/2 inch round rods. According to Custom Cars March 1958 the headlight rings were frenched 1955 Chevrolet units. In the National Roadster Show 1958 Program the headlights are described as being 1956 Chevrolet headlights. The hood was shaved, louvered, and extended 4 inches toward the grille cavity. The grille cavity was hand formed from copper tubing. The grille bar was a lengthened 1957 Chevrolet pickup grille that was backed up with expanded metal. The gravel pan was frenched to the fenders. The stock front bumper was kept, but Mario had it smoothed by filling the bolt holes. 1956 Buick taillight lenses were recessed into the lengthened fender sections, giving the car a tunneled effect. The stock rear bumper was replaced by a 1956 Pontiac bumper and the frenched gravel pan was extended 5 inches to match the contour of the Pontiac bumper. The car was fit with shortened 1957 Pontiac side trim. Door handles were removed, and trunk and doors were push button operated. The Pontiac spear was painted Gold, and the rest of the car was painted in a 1957 Oldsmobile Red color. Flames were painted at the end of the Pontiac side trim. Baldwin pinstriped the car. in white[2]

The car was lowered by reversing the spindles in the front. The frame was C'd in the rear and lowering blocks were added. 1956 Oldsmobile flippers were used on the wheels.[2]

Under the hood, the car was powered by a 1956 Pontiac OHV engine. Power was run through a 1939 Ford floor shift with lincoln gears.[1] Mario performed the engine swap himself.[2]

Inside the car was upholstered by Smith's Upholstery Shop in Santa Rosa. The interior was done in rolled and pleated black Naugahyde with white trim. The seats had to be dropped 4 inches due to the radically chopped top.[2] The steering wheel was borrowed from a 1956 Ford.

In 1958 the car was shown at the ninth annual National Roadster Show in Oakland, California. The car was entered in the Full Custom Sedans class and it came in second place behind Duane Steck's 1954 Chevrolet Sport Coupe - The Moonglow.[1]

Please get in touch with us at mail@kustomrama.com if you have additional information or photos to share about Mario Pirondini's 1950 Ford.