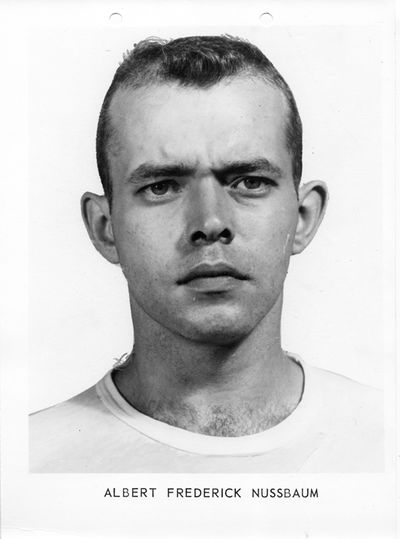 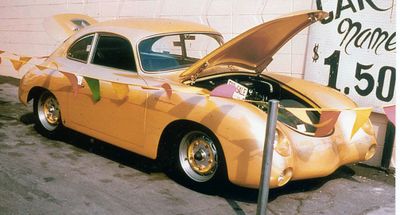 Albert Frederick Nussbaum was born April 9, 1934, in Buffalo. In the late 1950s, Nussbaum was arrested for possessing a Thompson Submachine gun and transporting unregistered weapons across state lines. Nussbaum was sentenced to the Federal Reformatory at Chillicothe, Ohio. There, he met Bobby Randell Wilcoxson, originally from Duke, Oklahoma, and Peter Columbus Curry, of Quitman, Georgia. Wilcoxson was doing time for buying a car with a bad check and then driving it across state lines.Young Nussbaum was smart. He competed in chess tournaments by correspondence from his Ohio jail cell. He was an expert photographer, locksmith and gunsmith, he was also a pilot, an airplane mechanic, a welder and a draftsman.[1]

Within a year of leaving Chillicothe, Nussbaum and Wilcoxson hooked up in Buffalo, New York with a plan to rob banks. The FBI would eventually label Nussbaum "the brains" of the team while Wilcoxson was marked as "the brawn." They knocked over a few local stores and service stations in Buffalo to raise seed money for an arsenal of weapons they would soon use robbing banks. Nussbaum and "One Eye" Wilcoxson allegedly robbed at least eight banks from 1960 to 1962, hauling in at least $250,000 - the rough equivalent of $2.8 million in 2008.[1]

Nussbaum taught himself to make pipe bombs. He and Wilcoxson posed as "Mad Bombers," setting off two bombs in Washington DC on June 15 and 16, 1961. They made several telephone calls pretending to be southern white supremists bombing the Capitol in protest of integration and the civil rights movement. The bombings were planned to distract law enforcement manpower near the White House so a Washington, DC bank could be easily robbed on June 30.[1]

On December 15, 1961, Curry joined Wilcoxson and Nussbaum to rob a branch of the Lafayette National Bank in Brooklyn, New York. Wilcoxson entered the bank and killed guard Henry Kraus with four quick shots from a Thompson Submachine gun. Curry was arrested in front of his mother’s house by the FBI in February, 1962. The FBI named Wilcoxson to the famous "Most Wanted List" on February 23, 1962 and Nussbaum on April 3, 1962. The FBI circulated over 1 million "wanted" posters and interviewed over 9,000 in New York state alone. The FBI declared the bandits as dangerous, warning the pair were armed with hand-grenades and 25 submachine guns. "They will not hesitate to open fire," the posters warned. 600 FBI agents searched worldwide for Nussbaum, Wilcoxson and Wilcoxson’s 19 year old "paramour," Jacqueline Ruth Rose of Paoli, Indiana, and Delray Beach, Florida.[1]

Dean Jeffries sold his 1956 Porsche to Nussbaum in 1962 and Nussbaum's partner, Bobby Wilcoxson bought the Aztec. A few days later the FBI showed up at Jeffries shop asking about the guy who bought his car. Turns out that Nussbaum and Wilcoxson were bank robbers on the FBI's ten most wanted list.[2] The FBI traced the Porsche to Florida where it was in Nussbaum's sister's driveway.[3]

On November 4, 1962, Nussbaum’s mother-in-law informed the FBI that Nussbaum was in Buffalo to secretly visit his wife and infant daughter. More than 30 FBI cars surrounded the Statler Hilton Hotel at 1 a.m on November 4, 1962, as Nussbaum arrived, expecting to pick up his wife, Alicia Nussbaum somehow signaled her husband and he raced out of the hotel parking lot, leading a parade of FBI agents on a 100mph chase through the cold, wet streets of Buffalo. A police dog catcher rammed Nussbaum’s car and the FBI arrested him. Mid morning on November 10, 1962, Wilcoxson and Rose were captured in Baltimore, Maryland.[1]

By May, 1963, Nussbaum pled guilty to the murder of bank guard Kraus and seven bank robberies. On February 8, 1964, Nussbaum was sentenced to 40 years in prison with eligibility for parole in 1971.[1]

Please get in touch with us at mail@kustomrama.com if you have additional information or photos to share about Albert Nussbaum.