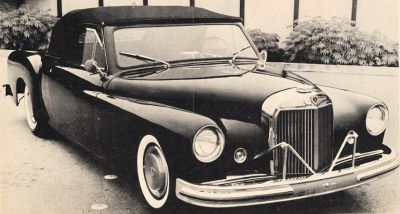 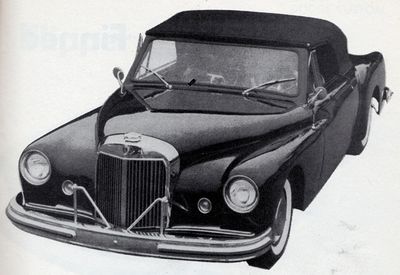 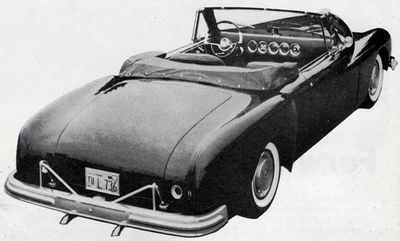 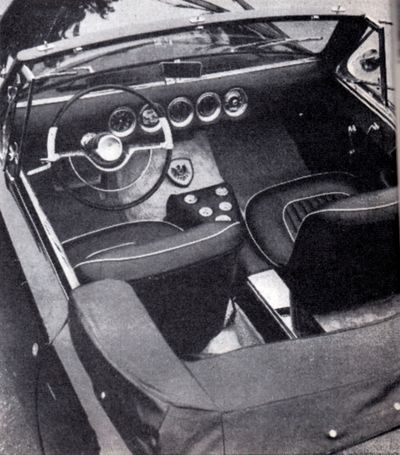 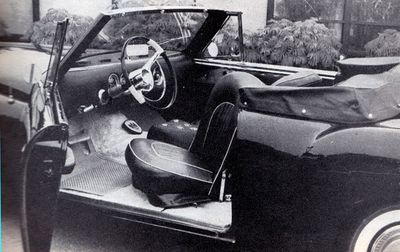 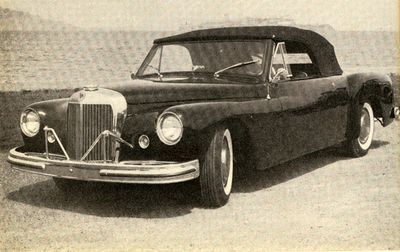 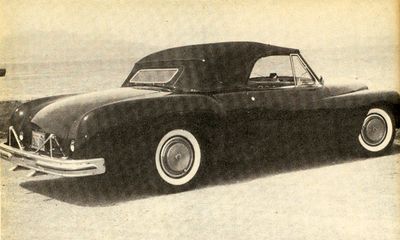 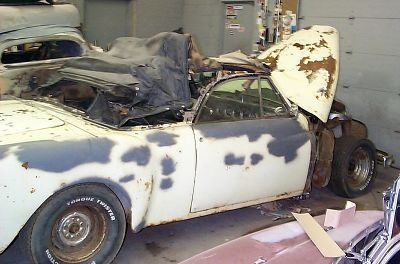 The Dodge as it looked when John Wetzel bought it in 1998. 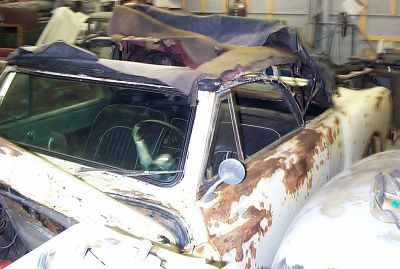 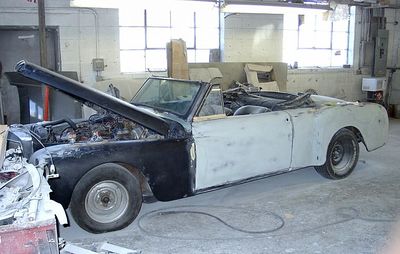 The car as it looked after John began to restore it. 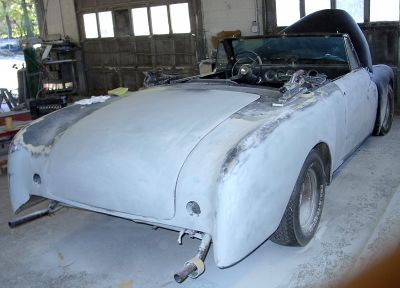 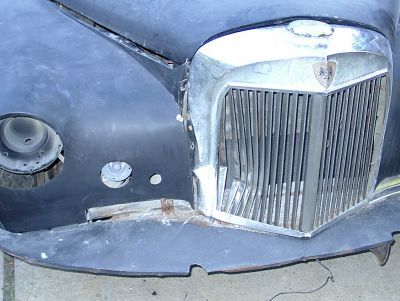 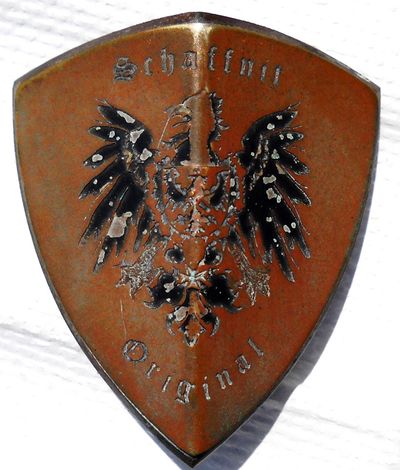 The custom emblem Bud made for the grille of his custom.

1949 Dodge Roadster restyled by Frederic Schaffnit of San Francisco, California. The car is also known as "Black Velvet".[1] Frederic, who was a sportsman and former dirt-track driver spent 23 months restyling his European inspired custom for his wife Virginia Schaffnit. The body was sectioned 6 inches all around, except for the rear fenders which were reworked to flow better. The front fenders and hood were altered to fit a Mercedes 300S radiator shell with stainless steel vertical grille bars.[2]Lincoln headlights were frenched and tunneled into the remodeled fenders. Bumper uprights made from ordinary tubing were welded onto the bumpers. Frederic removed all chrome side trim and the moldings in order to give the car an appealing one-piece look. The stock door handles were also removed and replaced by push buttons.[3] Frederic replaced the original V-type windshield with curved one-piece glass. After sectioning the car Frederic had to modify the convertible top slightly so it could be raised and lowered into the body. Inside, the car featured swivel bucket seats for easy entry and exit. A later model Chrysler steering wheel was mounted on a Jaguar column.[2]

In 1998 the car was listed for sale in Hemmings Motor News March 1998. The owner had listed the car as a creation of Barris Kustoms, as he had heard that it was featured in a Barris book. The current owner had found the car through a friend who worked at an exclusive hunting club on the coast of California. He was told of this custom sitting in a maintenance building on the grounds, and that it was owned by a member who had stored it there for some time. It took him two years to finally get permission to enter the building and look at the car. He thought the car looked like a big European sports car, and bought it since he was really into sports cars. After buying the car, he was struck with a heart valve infection that nearly ended his life. After valve replacement surgery this young 30-ish guy decided life was too short to spend on a long term project and put it up for sale. John Wetzel of Rutherford, New Jersey who had always wanted a true Barris Kustoms car answered the ad. He knew it wasn't from Barris Kustoms, but he had always wanted a sectioned custom too, so he bought it. The seller told John it was very rusty by California standards but was probably acceptable for an East Coast guy. The car appeared rusty but was all surface rust except for one nickel size rot hole. John brought the car to his local media blaster who had been a body shop owner for many years and had him start with one fender not knowing what was left after all the years of neglect and fearing the worst. The blaster called and was very excited about what he'd found after blasting the fender inside & out. He said he was amazed at the quality of the work; some of the best he had seen in 30 years in the business. The fender was hammer welded & lap filed to the point that there was almost zero lead and appeared very smooth and finished like a factory stamped piece. Only out in the bright sun could one see a slight change in gray color where it was once welded after sectioning. John would later find this quality body work around the entire car, even behind door panels and places no one would usually see. John plans to restore the car back to its former show car status, but since he has many other projects he isn't hurrying the restoration too much.[4]

Please get in touch with us at mail@kustomrama.com if you have additional information or photos to share about Frederic Schaffnit's 1949 Dodge.