From Kustomrama
(Redirected from The Ruby Ranch)
Jump to: navigation, search 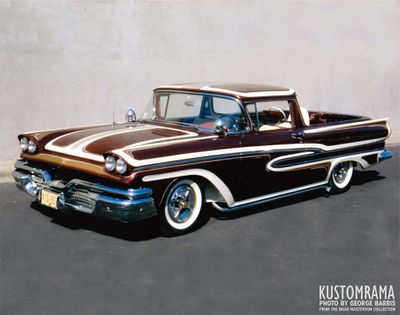 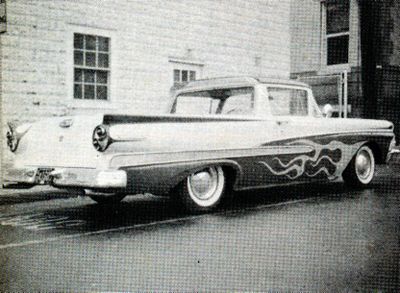 An early version of Terry's Ranchero as it appeared in the 1959 Hartford Autorama Souvenir Pictorial. 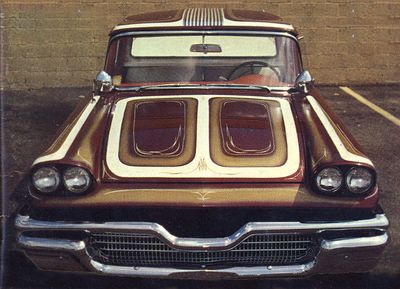 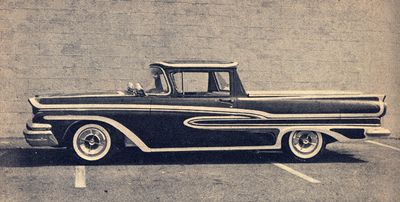 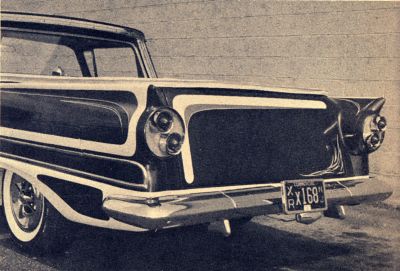 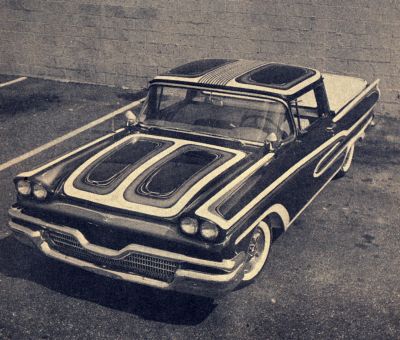 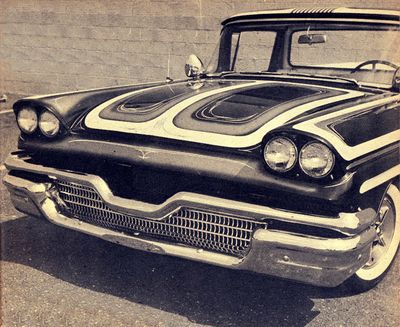 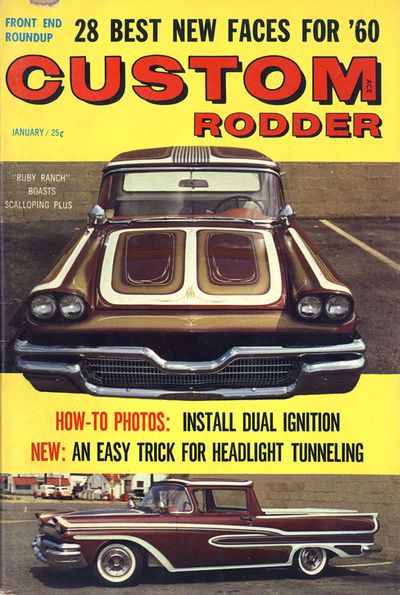 Terry's Ranchero on the cover of Custom Rodder January 1960 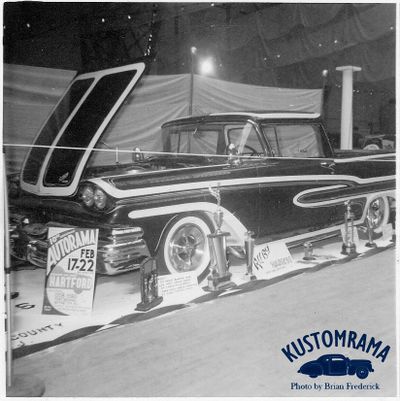 The Ruby Ranch at the 1960 Hartford Autorama, held February 17-22, 1960. This version featured chromed lake pipes and a license plate guard mounted on the front bumper. Photo from The Brian Frederick Photo Collection.

Terry's Ranchero as it appeared in 1961. 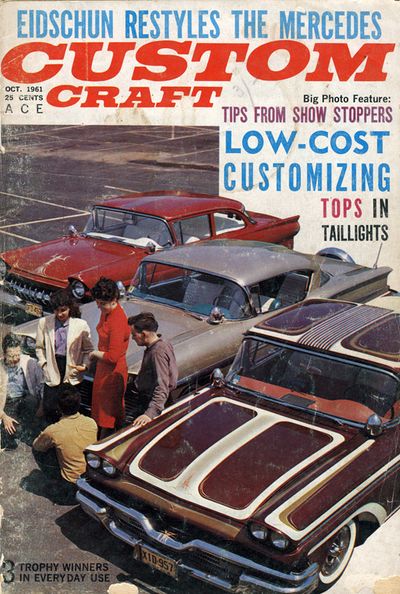 The Ruby Ranch on the cover of Custom Craft October 1961

1958 Ford Ranchero owned and restyled by Haulin' Gents member Terry Browning of Neptune City, New Jersey. March 1959, Terry's Ranchero was shown at the 9th annual Hartford Autorama, and an early version of the car can be seen in the 1959 Hartford Autorama Souvenir Pictorial. By then the Ranchero had been fitted with a shaved 1957 Ford hood. The tailgate had been shaved as well and the taillights were modified by adding 1958 Chevrolet Impala taillights. The Impala taillights were mounted on the original taillights. The car had been painted red and white with red scallops and gold flames, and it had been dressed up with dual spotlights and Moon wheel discs. It was lowered 7 inches in the rear, and 3 inches in the front. The bed tarp had hidden snaps, and the interior featured custom rugs. A 300 HP Interceptor Thunderbird engine provided the power.[1]

January 1960, another version of Terry's Ranchero was featured in Custom Rodder January 1960. This version is known as the "Ruby Ranch", and by then the stock grille had been replaced by a floating 1957 Dodge grille bar incorporating 1958 Chevrolet grille mesh into a frenched opening. A 1957 Dodge front bumper had also been mounted on the car. The stock trim was kept, but modified in order to make the car more interesting. The taillights still consisted of 1958 Chevrolet Impala taillights, but they had been set in lucite panels which acted as backup lights. The rear bumper was a shortened and rechromed 1959 Chevrolet bumper.[2] Once the bodywork was done, Terry panel painted, scalloped and pinstriped the car himself. The car was covered in 12 layers of deep ruby lacquer and hand rubbed until it glistened like a mirror. The scalloping was a careful mixture of ivory and bronze dusted with gold paint powder. The roof featured striping made with 1/4 inch chrome tape and 1/2 inch ivory scallops; dual spotlights were also added. The interior was upholstered in red and white.[2]

Terry's Ranchero was featured on the cover of Custom Rodder January 1960. February 17 thru 22 the same year the Ruby Ranch was also exhibited at the 1960 Hartford Autorama. In 1961 The Ruby Ranch was featured on the cover of Custom Craft October 1961. By then the car had been fit with a front license plate guard and chromed side pipes. Terry had also added pinstriping on the grille bar.

Please get in touch with us at mail@kustomrama.com if you have additional information or photos to share about Terry Browning's 1958 Ford.