From Kustomrama
(Redirected from The Ronbardue Kart)
Jump to: navigation, search 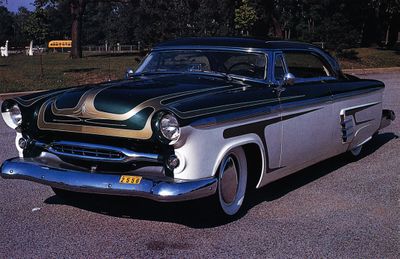 A photo of Ron's Ford that Andy Southard took after he had given it a scallop paint job with pinstripes in 1958. Photo courtesy of Andy Southard, from the book Custom Cars of the 1950s. 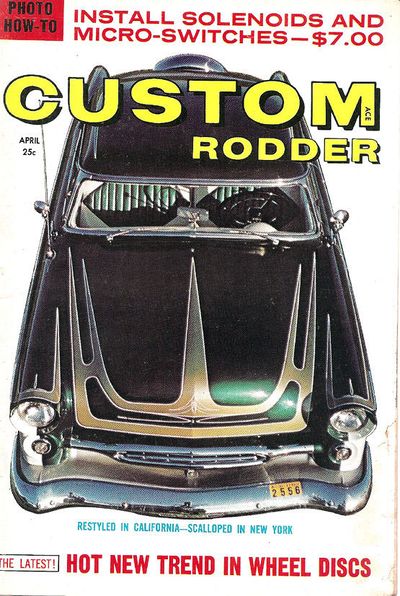 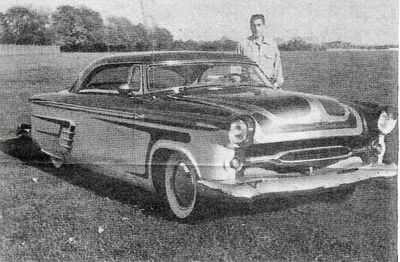 A photo of Ron with the Ford from the featured story in Custom Rodder April 1959. Photo by Ed Emsh, courtesy of Custom Rodder. 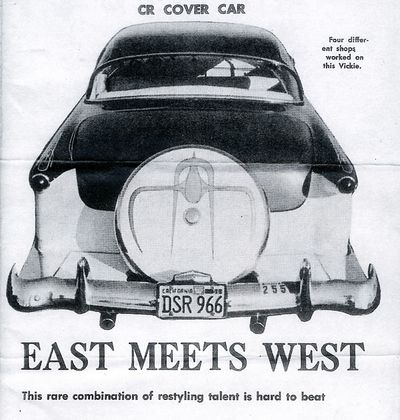 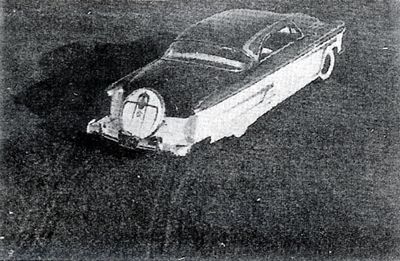 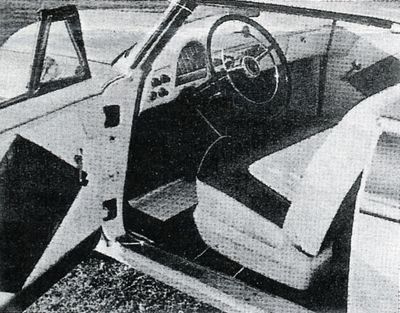 The upholstery was done by Hall's Top Shop of Oakland, California. Photo by Ed Emsh, courtesy of Custom Rodder. 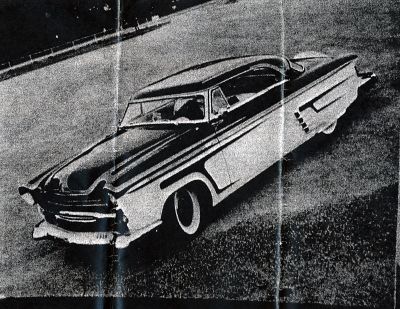 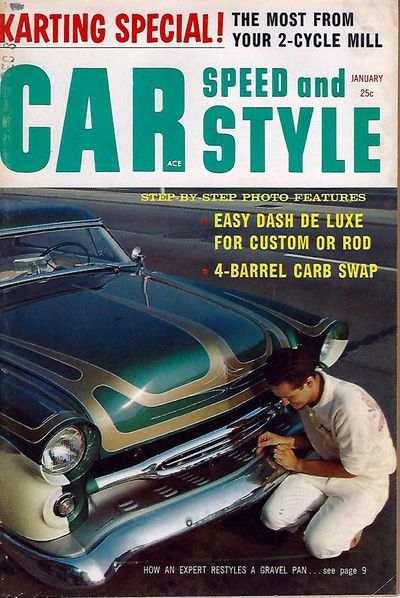 In 1960 Car Speed and Style January 1960 ran a story on Ron's Ford. The story showed how Ken Fleischman of H&H Auto Body punched louvers into to gravel pan of the car. Andy Southard, who worked with Ken out of H&H Auto Body at the time, painted and pinstriped the pan afterwards. Andy can here be seen on the cover pinstriping the car. Photo courtesy of Car Speed and Style. 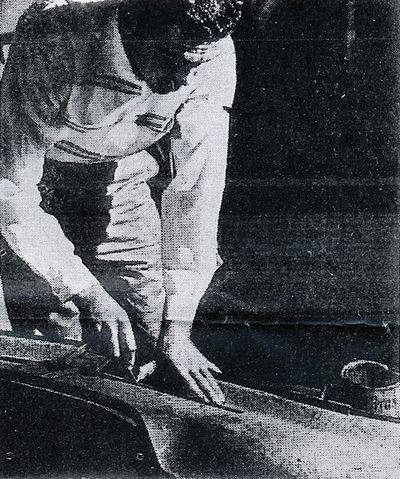 Ken Fleischman marking the positions of the louvers. Photo by Nick Samardge, courtesy of Car Speed and Style. 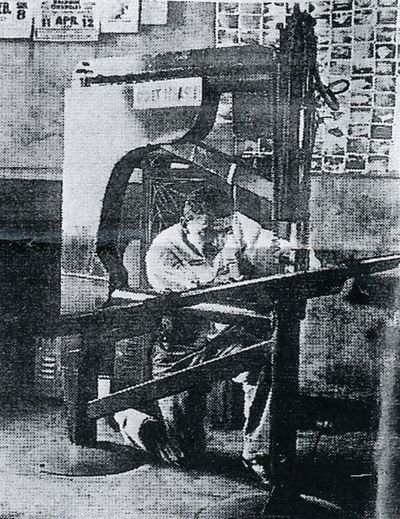 22 louvers in columns of 6,3 and 2 were punched into the pan. Photo by Nick Samardge, courtesy of Car Speed and Style. 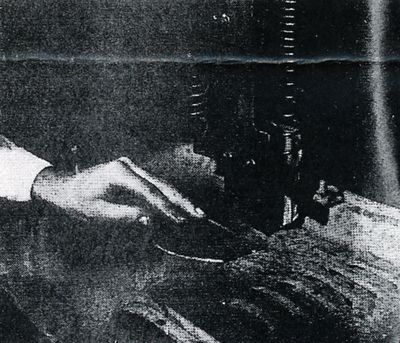 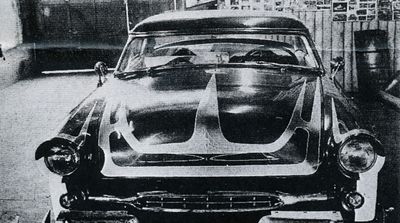 A photo of Ron's Ford in the H&H Auto Body shop. Photo by Nick Samardge, courtesy of Car Speed and Style. 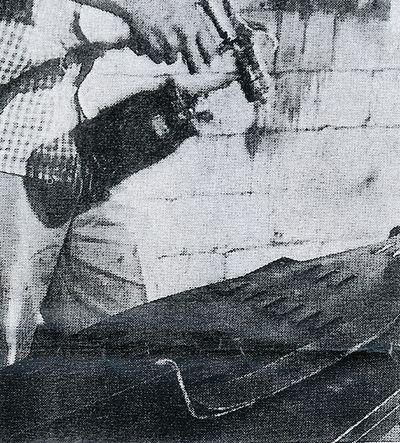 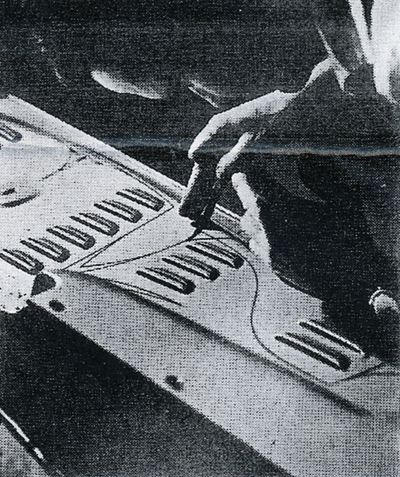 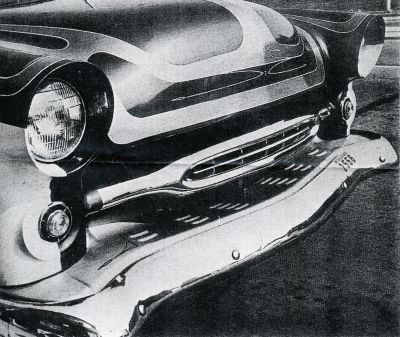 A closeup of the gravel pan after Andy had painted and pinstriped it. Photo by Nick Samardge, courtesy of Car Speed and Style. 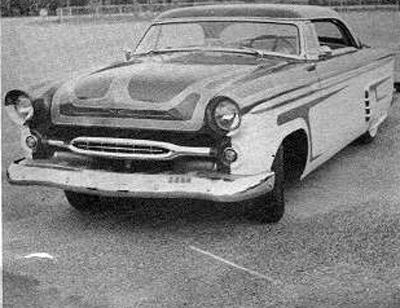 The Ronbardue Kart as it appeared in the souvenir program from the 1960 Hartford Autorama.

1952 Ford Victoria owned by Ron Fagundes of Napa, California. Ron bought the Ford in 1953. It was later on restyled by four different California and New York shops, and in Custom Rodder April 1959 it was featured as a rare "East Meets West" custom.[1]

Around 1958 Ron took his stock Ford to Barris Kustoms in Lynwood, California. He had the guys in the shop graft on a complete 1954 Mercury top on the car. The top was chopped 5 inches before it was welded to the body. At Barris the car was also fit with a 1954 Dodge rear window, and the trunk was extended 6 inches between the rear glass and deck seam.[1]

When Barris had done their thing to the car, Ron extended the hood 3 inches himself. He also made a narrower cavity that would house a 1954 Pontiac grille bar before the headlights were heavily tunneled. Doors and deck were stripped for all ornamentation and electrified. The side view was enhanced by 1958 Chevrolet Impala trim, and airscoops that were cut into the rear quarter-panels. The rear end was restyled by leading-in "Smoothee" accessory taillights, and by installing a Continental kit. The engine was bored before Ron fit it with a 3/4 cam and milled, ported and relieved heads.[1]

Once the bodywork was done, A-1 Body Work of Vallejo, California gave the car a green and white paint job. Hall's Top Shop of Oakland gave the car a custom green and white Naugahyde interior. It was dressed up featuring fender skirts and dual spotlights. It was lowered all around by chopping the springs up front, and by installing 5 inch lowering blocks in the rear. The build was completed in 1958.[1]

When the build was completed, the Air Force transferred Ron to the Mitchel Base in Long Island, New York. Ron brought the custom along. In New York it received a a lime-gold striping and scallop paint job by Andy Southard of Oceanside, New York.[1]

The scalloped version of Ron's Ford received a first-place trophy at the Road Panthers of Glen Cove, New York's show. It was also featured on the cover of Custom Rodder April 1959. According to the story in Custom Rodder April 1959, future plans for the car included under-hood and trunk upholstery.[1] In 1960, Ron's Victoria landed the cover of Car Speed and Style January 1960. This version had received louvers in the gravel pan by H&H Auto Body of Rockville Center, New York, the same shop that Andy Southard worked out of. The story showed how Ken Fleischman punched the louvers in the gravel pan. The louvered pain was painted and pinstriped by Andy Southard.[2]

In 1960, Ron's Ford was shown at the 10th annual Hartford Autorama. In the program for the show, the car was listed as "The Ronbardue Kart". This version featured a modified 1953 Ford engine. Build time was listed as 2 1/2 years, and it had the time won many awards. It had also appeared in over 8 magazines and programs.[3]

Ron entered the Ford in 22 shows while he was stationed in New York. In 1960, when Ron was discharged from the Air Force, he traded the car to a car dealership in Long Beach, Long Island, New York for a 1960 Ford Thunderbird.

Please get in touch with us at mail@kustomrama.com if you have additional information or photos to share about Ron Fagundes' 1952 Ford.