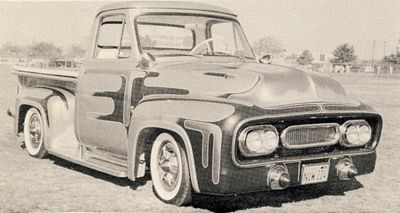 A photo of Ted's pick up from the 1958 Renegades Rod & Custom Motorama Souvenir Program.

In May of 2017, Ted told Kustomrama that he bought the truck in 1956, when he was 17 years old; "By then I was a long time car builder. It was lowered at Service Center in Paramount, and the Barris shop did everything else. Because I was a customer at the shop I was able to get involved on a low level, sanding, prep work etc. Sam Barris was gone before I got there. At the time I never saw George do any body work, just paint." The build was completed the same year.

Around 1956 - 1957 Ted and a partner opened up a store at Barris Kustoms, called Kustom Electrics, where they did high end stereo and installed TV's in cars. "We were way ahead of our time, as sound systems were very rare in those days and the interest was low, mostly AM radios. I also worked with Lloyd Bacon on the accessory shop there. George wanted to build a Custom City, with all aspects of work being offered. Hersh Conway worked there at that time, George taught him to paint and he later opened is own shop. George, Lloyd and I were partners in presenting the Bakersfield show and Lloyd and I had a company called All Cities Auto Shows. We worked with local car clubs to produce local shows." Ted believes they did the sound system for Bill Carr's Aztec.

In 1958 Ted's truck came second in the Truck Pickups class at the 9th annual National Roadster Show.[1] "The truck took first place in over 50 shows and was best of show at the Duster's show in Santa Barbara. I showed it all over California," Ted recalls.

The truck was also shown at the 1958 Renegades Rod & Custom Motorama in Long Beach, California. By then it had received its name "The Green Mist".

Ted became a member of Customs of Los Angeles. "We meet at car shows and was all Barris cars."

Ted owned the truck for about 4 years, "I went off to school, and had no cars until later. I did a lot of drag racing though, at Santa Anna, Sagas, long before Long Beach."

Please get in touch with us at mail@kustomrama.com if you have additional information or photos to share about Ted Long's 1954 Ford.