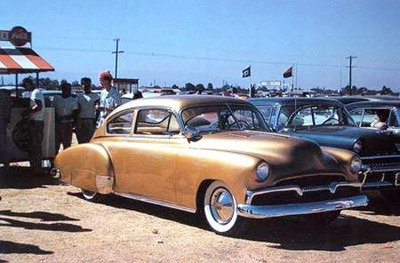 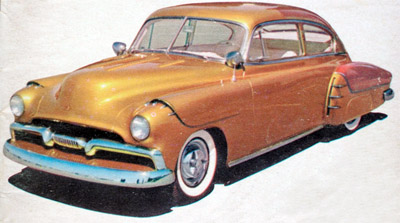 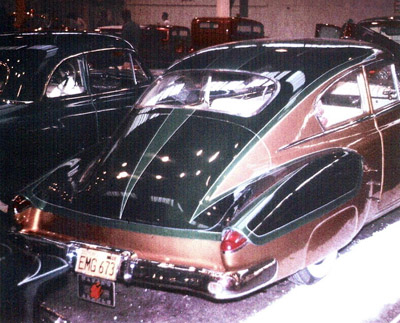 Frank Livingston's 1949 Chevrolet Fleetline, The Caribbean, as it appeared in 1958. New for the year was the two-tone green scallops by Pinoli's. These had to be applied in order to cover up the faded panels.

Pinoli's Body and Paint Shop was a body and paint shop run by Mel Pinoli in San Leandro, California. Mel worked out of a one-stall shop situated behind a family-owned gas station.[1]

In the 1950s Mel was experimenting with translucent colors, trying to find the secret to what would eventually be called candy paint. He combined different amounts of toner and clear, but the results weren't very good. On his way to achieve the look he also tried to paint Frank Livingston's 1949 Chevrolet with printing dyes from California Ink. The effect was good, but the paint faded bad, and Frank had to repaint his car after about a year. He knew that the ink weren't the answer so he went back to the toners. Eventually he hit upon a combination of toner and color that worked.[1] In 1955 Mel laid what is known as the first Candy Apple paint job. The car was a 1950 Chevrolet belonging to Ted Leventhal. At the time the paint was applied it was called green iridescent lacquer. Joe Bailon is often credited as being the first to apply Candy Paint. He may have been the first to apply Candy Red, but Pinoli was responsible for the first Candy Paint job.[1]

When Pinoli painted a car for you, that was your color for a year, and he wouldn't paint any other car your color for one year. At the end of the year if you wanted to keep your color exclusively yours you had to pay him for another paint job whether you needed it or not.[2]

Please get in touch with us at mail@kustomrama.com if you have additional information or photos to share about Pinoli's Body and Paint Shop.