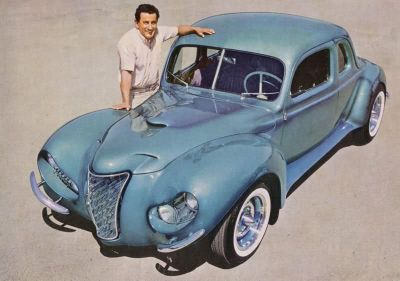 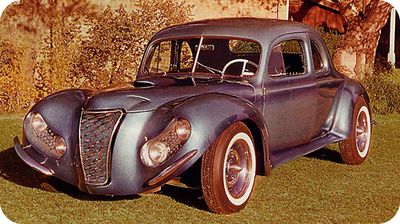 1940 Ford Coupe restyled by Barris Kustoms, Cushenbery Custom Shop and Hal Hutchins for Bob Crespo of San Francisco, California. Most of the major construction work on the car was done by Hal Hutchins before the car was brought to Barris Kustoms. At Barris all four fenders were raised by sectioning the body 8 inches. The fenders were then molded flush to the bottom of the body before a new hood was built, the grille shell was frenched in and canted quad headlights were installed. The headlights received tubing trim that was backed up with mesh. The center grille used a tubing outline with a mesh insert and it had three scoops in the hood. The rear matched the front-end styling, and nerf bars were incorporated into the hand made front and rear panel sections. It was painted in Skyline Blue Metalflake blended with Kandy Blue outlining.[1] Known as "Les Po Po", Bob's coupe featured four luxuriously upholstered bucket seats and a FM radio system. In January of 1962 this version was shown at the 7th San Mateo Custom, Rod & Sports Car Show.[2]

Please get in touch with us at mail@kustomrama.com if you have additional information or photos to share about Bob Crespo's 1940 Ford.