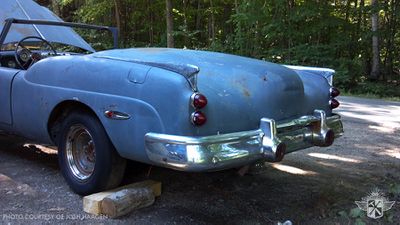 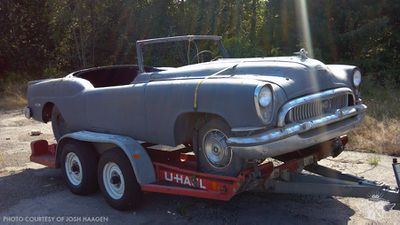 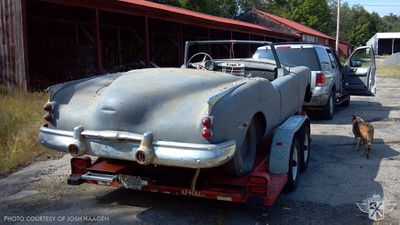 1950 Buick Roadster owned by Josh Haagen of Bangor, Maine. Josh bought the custom built boat-tail roadster in 2012. The seller knew nothing about the car, except that it was left behind his building by someone involved with cars. Josh has been told that the car was originally built in Berwick, Maine. According to Josh, a body shop guy by trade, it looks like the work was done 20-30 years ago. He believes the car was once completed and run on the road, before it was disassembled for a restoration that never happened. The cowl ID tag can be traced back to a 1950 Buick Special Sedanette, but for all Josh know, the entire cowl panel could be from another car. The car seems to have a combination of 1950 Buick special or super body lines on the rear quarter, with what looks like 1952 Buick tail fins and 1954 Buick taillights on a custom made boattail rear area. The boattail is made from another cars hood. The cowl has been cut and lowered into the firewall, and the the doors were cut off. The hood has been sectioned, and the windshield frame looks to be from a convertible. 1953 or 1954 Buick headlights and headlight doors have been installed along with a 1953 Buick front bumper. The grille installed inside the front bumper seems to come from a 1960s Buick Invicta. The rear bumper is from a 1950 Buick. The overall design of the car looks to be inspired by the 1953 Buick Wildcat I concept car.[1]

After the car was posted in the Kustomrama Lost and Found section, Joseph P. Carter wrote Sondre Kvipt of Kustomrama to say that a friend of his, who worked at Robbins Auto Parts in Portsmouth, New Hampshire, bought the car from a place near a Naval Air Station in Maine around the early part of the 1970s. At that time the car was complete, but not running. Joseph went up with the guy and another fellow to pick it up with a truck and a car trailer. The trailer broke down, due to a bad wheel bearing, and the car with the trailer was dropped off at the other guy's mom's house somewhere in Maine. That was the last time Joseph saw the car, as he joined the Army, and lost track of his old friends in Portsmouth.[2]

Josh is currently looking for more information on his Buick. If it has any significane past he will consider restoring the car back to its original version. If anyone knows more about this car, please send an email to mail@kustomrama.com

Please get in touch with us at mail@kustomrama.com if you have additional information or photos to share about Josh Haagen's 1950 Buick.