From Kustomrama
(Redirected from Jim Desalle)
Jump to: navigation, search 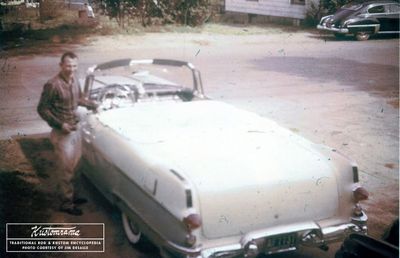 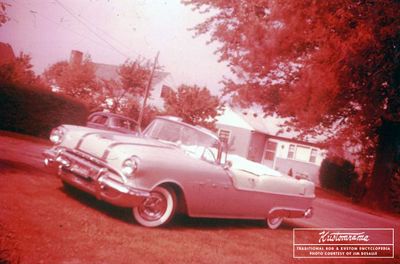 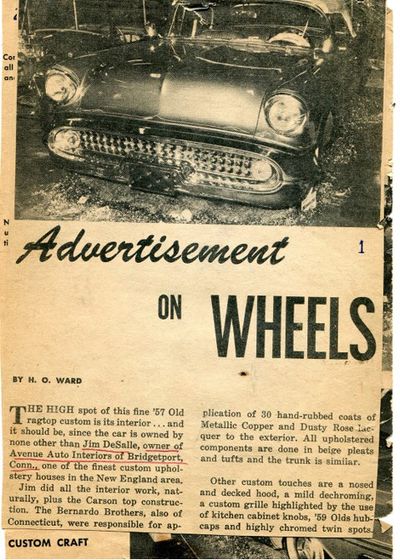 Once completed, Jim's 1957 Oldsmobile Convertible took first for the best interior at the Hartford Autorama. Jim did all the interior work himself, including a padded top. The Bernardo Brothers gave it 30 hand-rubbed coats of Metallic Copper and Dusty Rose lacquer. 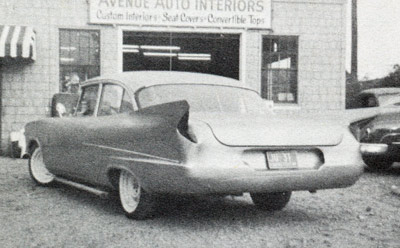 A photo of Tom McHugh's 1957 Plymouth two-door sedan taken in front of Avenue Auto Interiors. Tom's Plymouth was restyled by Bernardo Auto Body in the late 1950s or the early 1960s. The upholstery was done by Jim. 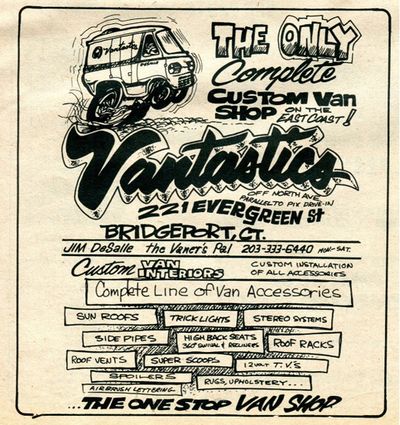 Jim went on to do Van interiors, opening up a shop called Vantastics. "I guess I was the first in the New England area to do so," Jim told Kustomrama. "I did man vans for Joe's show. Many of them took first places," he recalled. 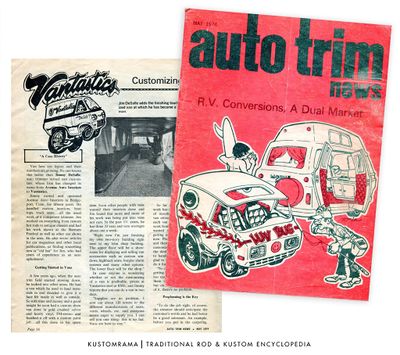 Auto Trim News May 1974 featured a case-story on Jim, back then he had done 33 vans in the past 1 1/2 years, and he was averaging about one van a week at the time.

Jim DeSalle of Bridgeport, Connecticut. Jim ran Avenue Auto Interiors, a custom upholstery shop known as one of the finest upholstery houses in the New England area back in the 1950s. "I started doing interiors in the early fifties, when I was about 16 years old," Jim told Sondre Kvipt of Kustomrama in March of 2020. "My first custom car was a 1949 Ford ragtop." He got the bug when his boss took Jim and his colleagues to the Hartford Autorama in the 1950s.[1]

After operating Avenue Auto Interiors for fifteen years, Jim changed its name to Vantastics, turning it into a van customizer shop. The auto trim field had started slowing down, so Jim looked into other areas.[2] "I guess I was the first in the New England area to do so," Jim told Kustomrama.[1]

Jim had a van which he used to haul materials in, that he decided to give a facelift inside, as well as outside. He turned it into a custom show van done in gold crushed velvet and heavy vinyl with a custom paint job. The work was done in his spare time. Auto Trim News did a story on Jim in their May of 1974 issue, and according to that story, it didn't take a long time before other people with vans wanted their interiors done by Jim. When the article was made, Jim had done 33 vans in the past 1 1/2 years, and he was averaging about one van a week at the time. "Right now I'm just finishing my own two-story building right next to my trim shop building," Jim told the journalist. "The upper floor will be a showroom for displaying and selling van accessories such as custom windows, highback seats, burglar alarm systems, and many other options. The lower floor will be the shop." Prices started at $500, and Jim could do a van in two days. "I can tell you one thing," Jim added, "this is no fad. Vans are here to stay."[2]

When Auto Trim News did a case-story on Jim, all of the van-work had come to him from word of mouth advertising. "His own van attracted attention," the article stated, "and then each van he has done has led to work from someone who saw it and wanted something like it."[2] He did many vans for the Hartford Autorama, "many of them took first places," he recalled in 2020.[1] Then dealers started calling him. "People go in to buy a van and then they ask about having it customized. More often than not, the dealer is not in any position to handle this, so he is only too glad to know someone who can do it for him."[2]

Please get in touch with us at mail@kustomrama.com if you have additional information or photos to share about Jim DeSalle.