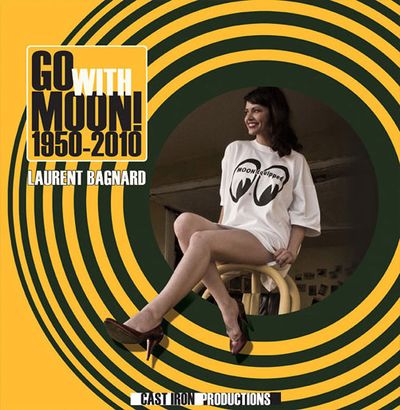 GO with MOON! - 1950-2010 is a full-color book filled with photos from the Moon archive. The journey starts in New Richland, Minnesota, and we get a little glimpse of Dean's life prior to moving to California in 1934. Dean's career within hot-rodding is thoroughly documented. Dean was an active photographer, and there are plenty of photos and documents used to tell us the complete history of Moon Equipment, Dean Moon, and his iconic Mooneyes. A fascinating story, so be sure to grab a copy if you come across one for sale. The book is hard to come by. It is sold out in most stores, including Amazon.com. If you want to grab a copy, your best chance of getting one is to start searching on eBay. Click here to check if GO with MOON! - 1950-2010 is available on eBay.

GO with MOON! - 1950-2010 is a fascinating story that starts in Minnesota and ends in Japan. A story about two men. Two men with a vision, passion and a dream. Filled with photos from the Moon archive, Dean Moon's career within hot-rodding is thoroughly documented in the book. Dean was an active photographer, and there are plenty of photos and documents used to tell us the full history of Moon Equipment, Dean Moon, and his iconic Mooneyes.

Dean Moon was born May 1st, 1927 in New Richland, Minnesota. His father, Dallas "Pop" Moon ran a Phillips 66 Gas and Service station in town. Pop was also one of the bootleggers dealing with illegal alcohol in the area, and according to rumors, Dean was helping his father to supplement the gas station income by delivering illegal alcohol to the Mayor and Sheriff of their town.

In 1934 Pop sold the gas station, and the Moon family moved to California. Pop bought a cafe in Santa Fe Spring that he named Moon Cafe. Dean and his brother Buzz helped serve food and drinks to the oil workers in the area in their spare time. Dean started showing a real interest for the pumping machinery at the back of the family building, and he started to hang out with the Shaffer Tool Works employees. He was allowed to assist the maintenance crew, and earnt the right to learn machining and engineering at a very young age in their workshop.

Around the same time Dean and his brother Buzz got into cars and hot rodding. Several builds were bought and hopped up, and Dean became a member of the Hutters car club. Having an entrepreneurial mind, Dean began creating and selling his own speed parts. The Moon Fuel Block, multi-carburetor linkage, and a dual-points Zephyr ignition for Ford flatheads. Pedals, tanks and wheel discs followed, shooting Dean and his company in to the 1960s as one of the most recognized and respected brands in the industry.

In 1968 Dean was contacted by Don Nichols to build engines for the Japanese car manufacturer Nissan which was planning to install them in their R381 Grand-Prix Cars. Dean put Fred Larsen to work and had him build 5.5 liters small-block engines. The whole team flew over to Tokyo to attend the race and help out in the pits. Nissan and the Moon-tuned Chevrolet engines won the Grand-Prix that year, establishing Moon as a popular brand in Japan.

Moon was pretty famous in Japan in the sixties, and Shige Suganuma knew the logo well as a kid. In 1983 he met Dean in California. They became friends and Shige began buying and selling Moon discs, t-shirts and accessories in Japan. One thing lead to another, and when Dean passes away in 1987 Shige buys the company and decides to keep running it like Dean did in the 1950s and the 1960s - Keeping traditions and history alive. A very fascinating story, so be sure to grab a copy of this book if you ever come across one for sale.

The book is hard to come by. It is sold out in most stores, including Amazon.com. If you want to grab a copy, your best chance of getting one is to start searching on eBay.

Please get in touch with us at mail@kustomrama.com if you have additional information or photos to share about GO with MOON! - 1950-2010.