Jim's roadster as it appeared in the souvenir program from the 1950 National Roadster Show. 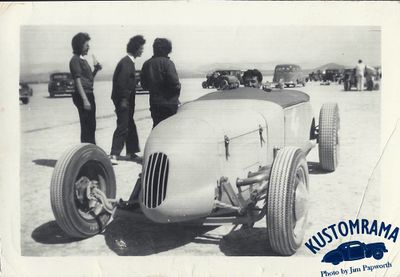 A photo of Ed Olson in Chuck's lakester. According to the caption on the back, this photo was taken at a 1950 Rosamond event. Photo from The Jim Papworth Photo Collection. 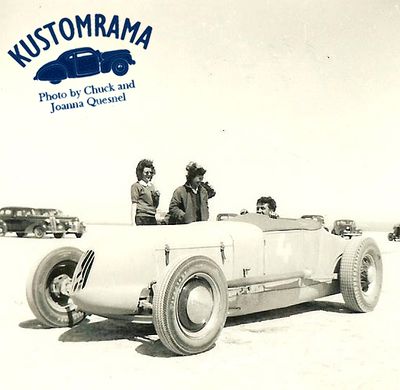 Another photo of Chuck's Model T lakester taken at the same Rosamond dry lakes event. The caption on the back of the photo says "Chuck's Car. Ed Olson in car, Janet Olson in jacket." Photo from The Chuck and Joanna Quesnel Photo Collection. 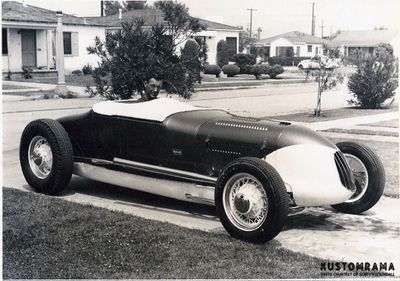 A photo of Bob Kuykendall in the roadster. The photo was taken in his parents driveway in Culver City.[1] 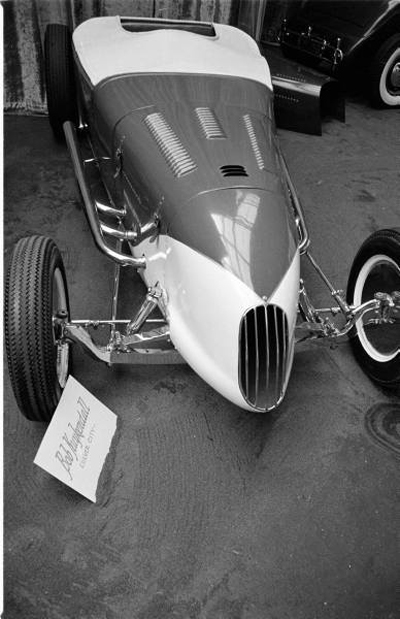 Another photo of the roadster from when Bob owned it. 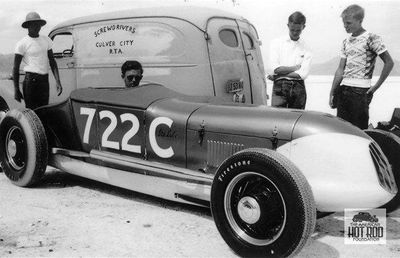 A photo of Bob in the roadster at a dry lakes event. Photo courtesy of the American Hot Rod Foundation. 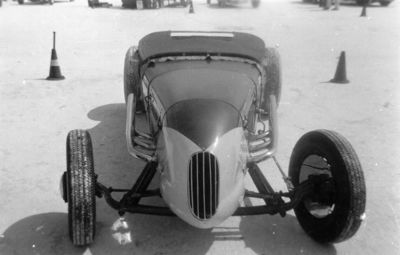 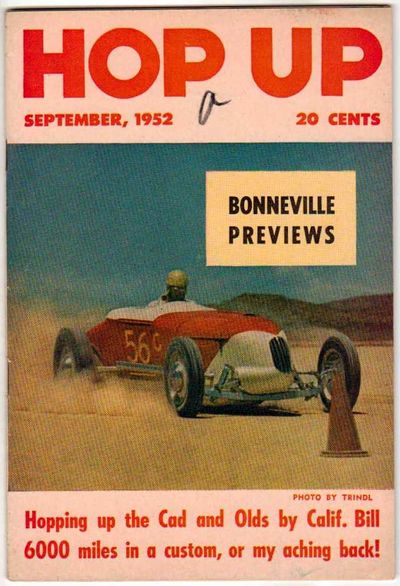 The two-toned version of the roadster was featured on the cover of Hop Up September 1952. By then it had bee sold to LeRoy Titus.

1927 Ford Model T roadster owned and raced by Jim "Jazzy" Nelson of Sanger, California. January 19-22, 1950 Jim showed the car at the 1950 National Roadster Show, and according to the Souvenir Program from the show, the car was built by Jim and his brother Paul. Jim raced in the Mojave Timing Association, and the low-slung roadster held a one-way run record of 141.06 when it was shown at the National Roadster Show. It held a 2 way run average of 138.30.[2]

Sometime after the 1950 National Roadster Show, the roadster was sold to Culver City Screwdrivers member Chuck Quesnel of Culver City, California. According to captions found on the back of old photos from the Jim Papworth Photo Collection, Chuck raced the car at Rosamond in 1950. Later on, the car was owned by fellow Culver City Screwdrivers member Bob Kuykendall.[3] When Bob owned the car, it featured a two-tone red and white paint job. This version of the roadster was featured on the cover of Hop Up September 1952. By then it had bee sold to LeRoy Titus.[4]

In 2015 the car was still around, owned and restored by Chuck Sarno.[5]

Please get in touch with us at mail@kustomrama.com if you have additional information or photos to share about Jim Nelson's 1927 Ford.