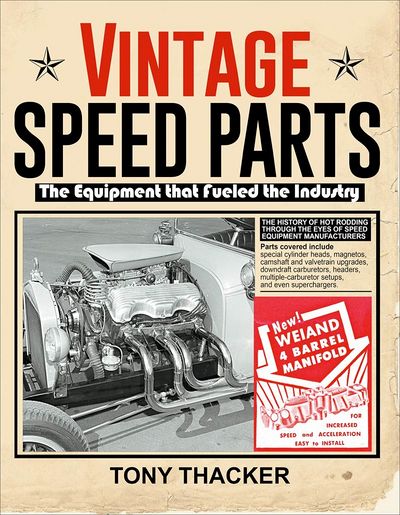 Vintage Speed Parts The Equipment That Fueled the Industry by Tony Thacker - Published on October 10, 2022 this book follow the history of hot rodding through this nostalgic look at vintage speed equipment. Click here to check price and availability on Amazon.com.

Follow the history of hot rodding through this nostalgic look at vintage speed equipment.

When most people think of speed parts, they rewind a few decades and think back to the Ford flatheads that were so prevalent in the 1940s and 1950s. However, did you know that the speed parts industry began way back in the Model T era? It’s true. As soon as vehicles were mass-produced, manufacturers were looking for ways to make them faster. Manufacturers, such as Roof, Rajo, Winfield, Miller, Frontenac, and Holley, made speed parts for 4-cylinder Model T engines and accomplished speeds of up to 100 mph!

In Vintage Speed Parts: The Equipment That Fueled the Industry, veteran hot rod historian Tony Thacker looks at the history of hot rodding through the eyes of speed equipment manufacturers. Covered chronologically, the book begins with the early 4-cylinder engines. In 1932, Henry Ford introduced the flathead V-8, which was slow to be adopted as the engine of choice in racing until the parts industry caught up. Once it did, the flathead, although interrupted by the war, was the engine to run until the automobile manufacturers introduced overhead-valve V-8 engines in the late 1940s. Chrysler's early-1950s Hemi and Chevrolet’s small-block V-8 in 1955 spelled the end for the flattie. Both mills dominated well into the 1970s, and the speed industry was there to support all platforms in spades. During that period, every auto manufacturer made a V-8 worthy of modification, and the speed industry boomed. Eventually, the speed equipment manufacturers grew to the point of becoming corporate entities, as mergers and acquisitions became the much less interesting story.

Parts covered include special cylinder heads, magnetos, camshaft and valvetrain upgrades, downdraft carburetors, headers, multiple-carburetor setups, and even superchargers. Everyone figured out how to make engines more powerful, upgrading with the type of parts that were being produced decades later, even to today. Join in the fun of reviewing the history of speed through this fascinating tale of vintage speed parts.

Please get in touch with us at mail@kustomrama.com if you have additional information or photos to share about Vintage Speed Parts The Equipment That Fueled the Industry by Tony Thacker.