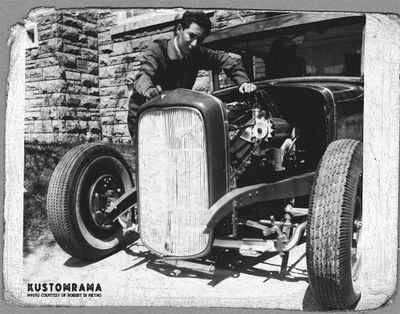 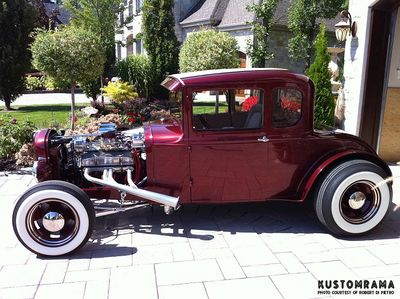 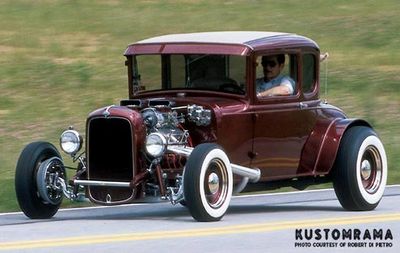 1931 Ford Model A coupe owned and built by Robert Di Pietro of Quebecl, Canada. At age 13, Robert found his dream car on the cover of Rod & Custom September 1958. The car was Gil Granucci's 1931 Ford Model A coupe. By the time he had reached the age of 15, Robert had already bought a 1931 Ford Model A coupe for $75. The coupe was channeled to mimic Granucci's hot rod. Robert had no previous experience or proper tools, so the floor was cut out with a Vise-Grip used like a can opener. A new floor was made from plywood. Robert then purchased a 1932 Ford frame for $15. He pulled the coupe off of the A frame, replaced the body with a roadster pick up shell he had acquired, and traded the functioning Model A for a set of used acetylene torches. A 1947 Ford was purchased for another $15. In 2002 Robert told Hot Rod Magazine that you could buy a late 1940s Ford for next to nothing in those days; "Then you had all your mechanicals: engine, trans, * rearend, spindles, and brakes." He put the 1947 Ford gears in a 1939 Ford case, but before the flathead ran, it was replaced by a Chevy 283, which was mated to the Ford trans with an adapter from Honest Charley.[1] The build was completed in 1961.

Later on, a hotter 327 engine was installed in the coupe. After going through numerous gearboxes and rears, Robert upgraded to a Corvette T10 four-speed and a 1957 Chevrolet rear end. By 1966, the 327 had high-compression pistons, a big solid cam, an aluminum flywheel, and 1,500-cfm worth of dual-quads in an effort to stay ahead of the musclecars. In 1972 the car was parked so Robert could raise his famile. It resurfaced in 1985 with a street-rod revamp. In 2000 Robert decided to return it to its roots. Robert still owned the old hot rod in 2015.[1]

Please get in touch with us at mail@kustomrama.com if you have additional information or photos to share about Robert Di Pietro's 1931 Ford.