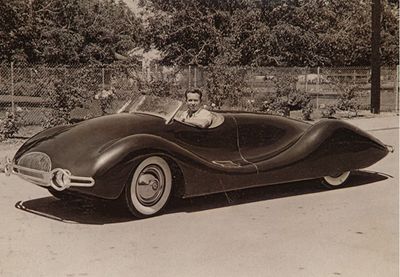 Norman E. Timbs was a very talented automotive designer from Los Angeles, California. Norman worked with Preston Tucker on his Tucker automobiles, and he also built Indy cars for the Keck Family.[1]

Norman worked as an independent engineer-designer, and he was hired by Sterling Edwards to help him design a European inspired American sports car called the Edwards Special. Edwards had been to Europe and seen the cars produced over there, so he was inspired to build his own high-quality sports car. Edwards wanted to build a vehicle that could be driven around town during the week, and raced during the weekends. Norman's job was to transform Sterling's imaginary design into reality by creating drawings of the car.[2] The first Edwards Special was built in 1949, about the same time as Norman completed his own Streamliner.[3]

Please get in touch with us at mail@kustomrama.com if you have additional information or photos to share about Norman E. Timbs.