From Kustomrama
(Redirected from Lil Beauty)
Jump to: navigation, search 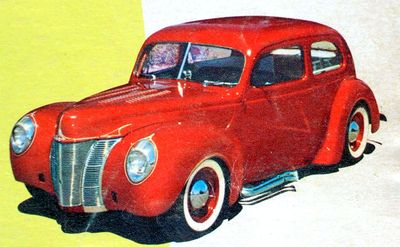 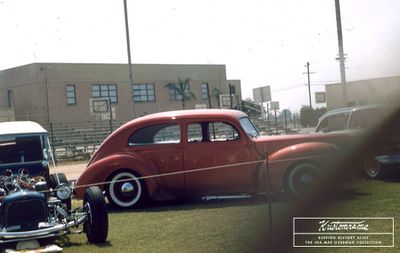 A photo of the car from the 1957 Norwalk Motorcade show. Photo from The Ina Mae Overman Collection. 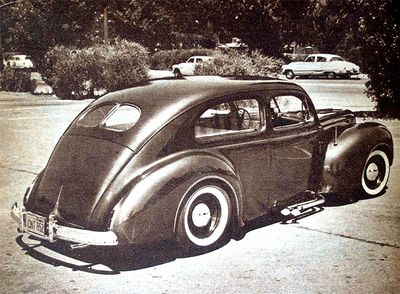 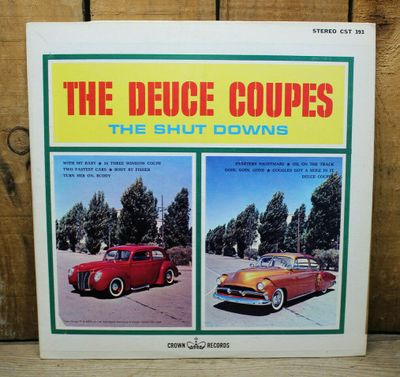 Dave's Ford and Frank Livingston's 1949 Chevrolet were featured on the cover of the album "The Deuce Coupes" by The Shut Downs. This copy of the record was advertised for sale on eBay in July of 2020. The asking price was US $69.99. Click here to check out the auction listing. 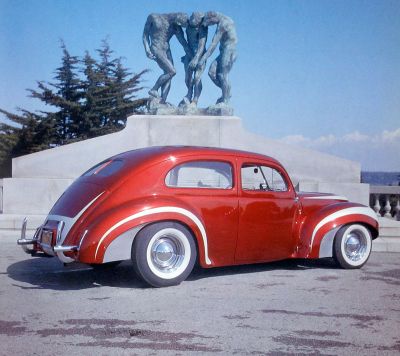 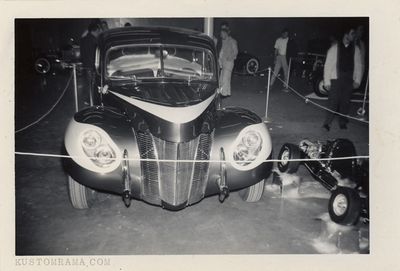 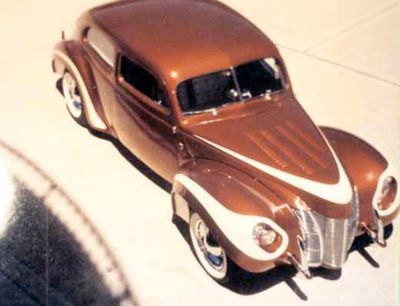 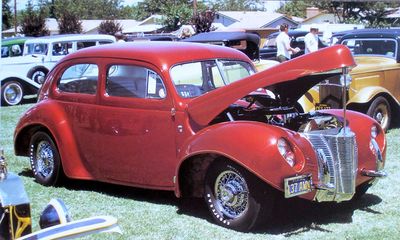 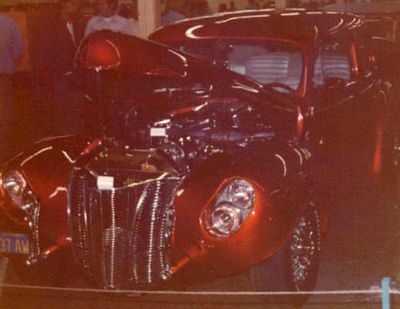 1940 Ford Sedan owned and restyled by Dave Cunningham of San Francisco, California. The car is better known as the "Li'l Beauty". Dave channeled the body roughly 10" over the frame. After that he trailered the car to Barris Kustoms to have the job completed. Once the job was done, the car graced the covers of several car magazines during the late 1950s and the early 1960s. A couple of years after the car was completed, Dave once again brought the car over to Barris Kustoms for further modifications. Barris raised and frenched the rear fenders into the body with concaved Reynolds Aluminum open wheel wells. The headlights were canted and tunneled with custom nerf bars. The hood was sectioned and fit with louvers. The taillights were borrowed from a 1941 Studebaker. Once the bodywork was completed the car was painted in Kandy red lacquer with diamond dust pearl impressions. The car was fit with deep chrome reversed rims with baldy caps.

After being away from the car scene for many years, Bill Roach of Concord, California found the car wasting away in storage. The car was for sale and Bill bought it for $700. The car was in a bad condition after seven years of neglect and a total rebuild was required. In Rod Action September 1973 Bill admitted that it would have been less expensive and easier to build a similar car from scratch rather than restore the original one. Bill decided to modernize the car when he restored it. The car was equipped by a 302 Ford V8 hooked to a C4 automatic transmission. A Mustang rearend was fitted using Monroe shocks. In front a 2 inch dropped beam axle was mated to Mustang disc brakes and the power/tilt steering mechanism from a 1972 Ford Torino was adapted. The entire rear section of the car that was modified when the car was channeled had to be rebuilt. A trick part of the restoration was changing the rear fender splash panels. 8 1940 Ford fenders were used in order to complete this operation. Pete Ogden restored the floor, the fender panels, and the firewall. The restoration was started in 1971 and took 1 1/2 years to complete.

In November of 2018 the Dave Cunningham 1940 Ford, and 30 plus other cars, including The Norman Timbs Special, Lee Talbot and Sam Chakries' 1953 Studebaker Pick Up, and Ray Goulart's 1950 Oldsmobile were lost to the Malibu wildfires as Gary Cerveny's collection burned down to the ground.[2] A tragic day in custom car history.

Please get in touch with us at mail@kustomrama.com if you have additional information or photos to share about Dave Cunningham's 1940 Ford.