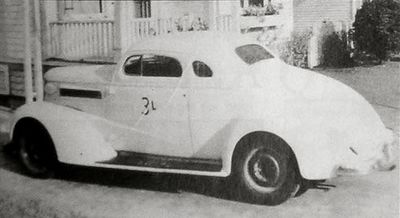 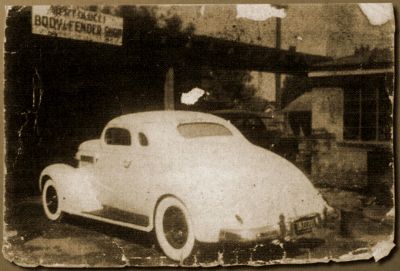 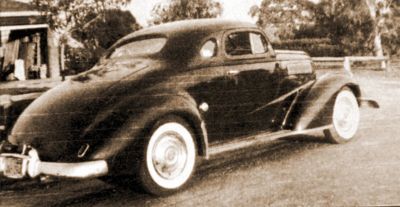 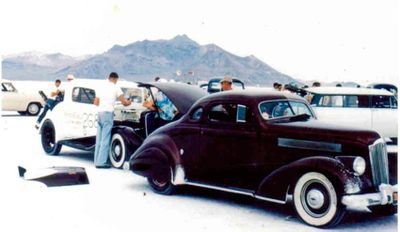 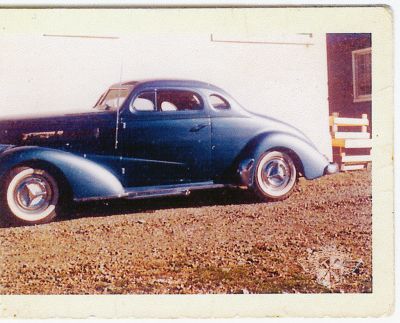 These photos were taken by the guy who sold the coupe to Jim Brown. The car was still blue when Tom McHenry bought it from Tom Sutter. Photo provided by Tom McHenry. 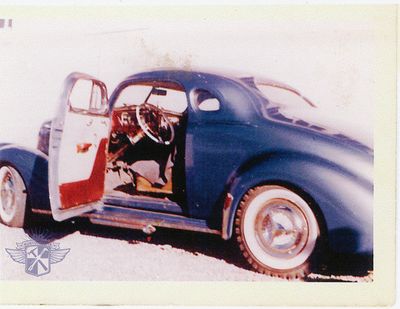 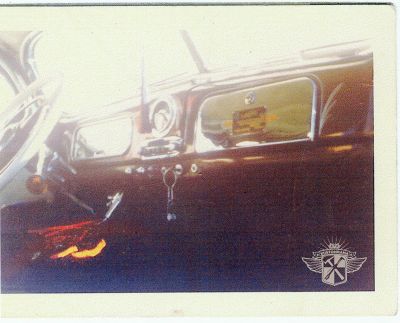 The plaque on the glove box door is a timing tag from Bonneville Nationals. It read the date, had Bertolucci's name, and documented that the car had been timed at 114 mph. According to Dick, the engine burned the two center pistons on the run, and he ran it on four cylinders through the timing lights. Photo provided by Tom McHenry. 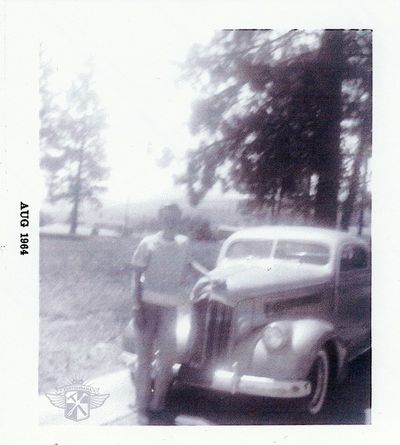 Tom McHenry with the coupe in August 1964, right after he got the car back on the road again. Photo provided by Tom McHenry. 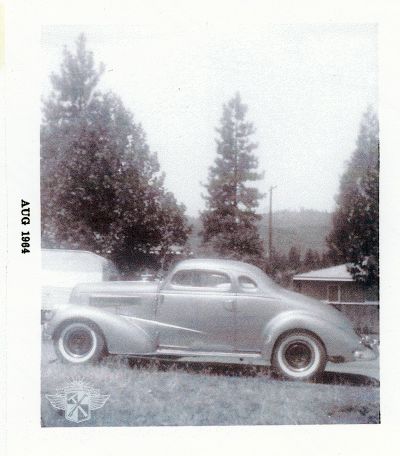 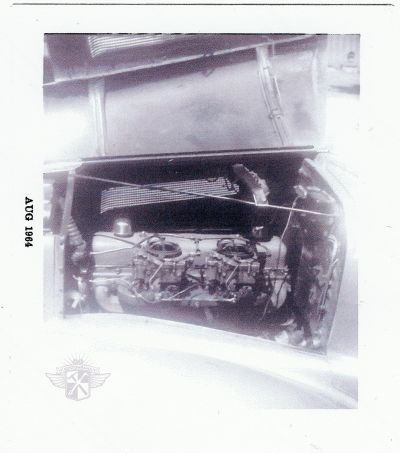 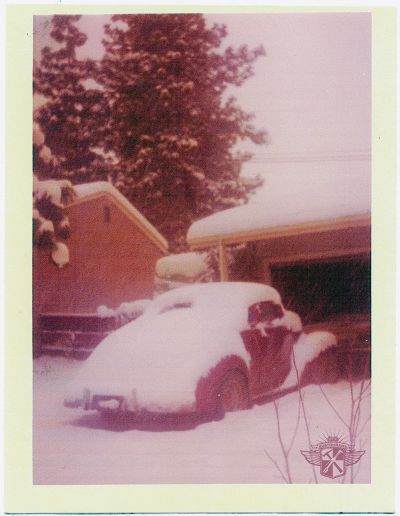 After getting the coupe back on the road again, McHenry had the coupe repainted Tihisain Red. This photo is taken during the first winter that Tom owned the car. Photo provided by Tom McHenry. 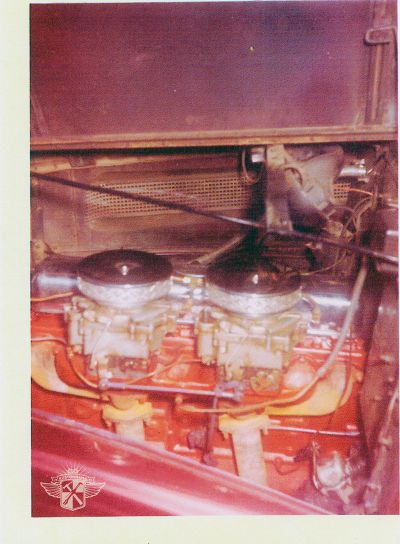 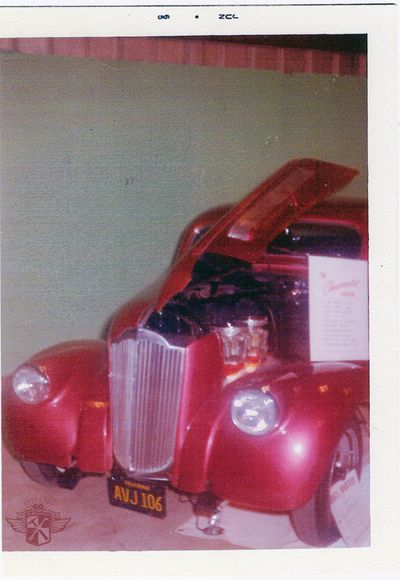 The coupe at an indoor car show in Redding, California in 1965. Photo provided by Tom McHenry. 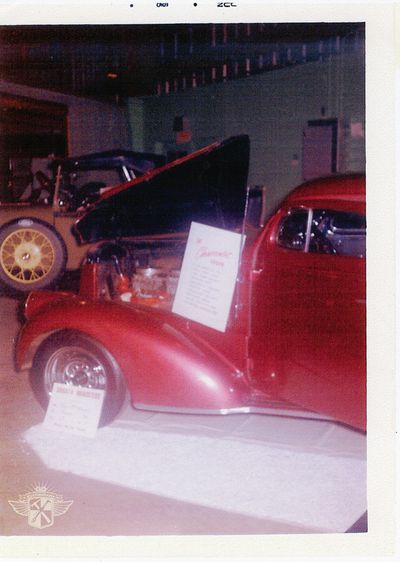 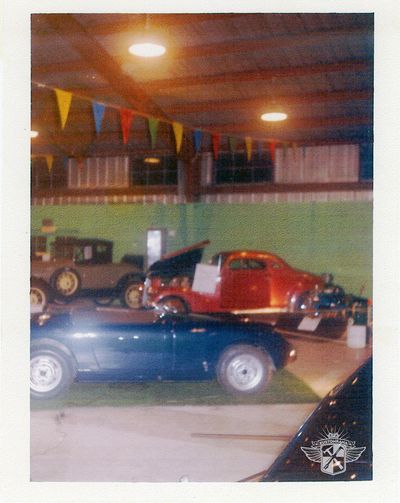 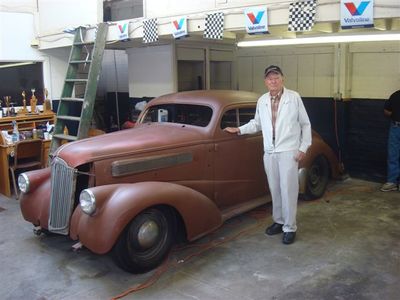 Dick Bertolucci with his old coupe in September of 2009. Photo by John Stimac.[1] 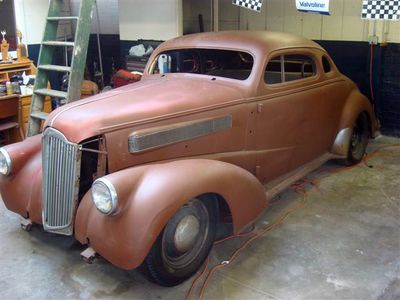 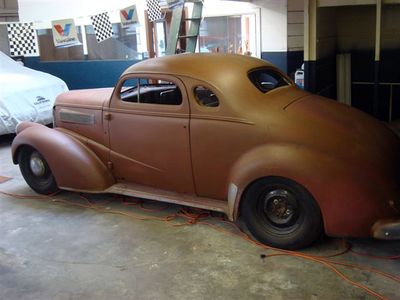 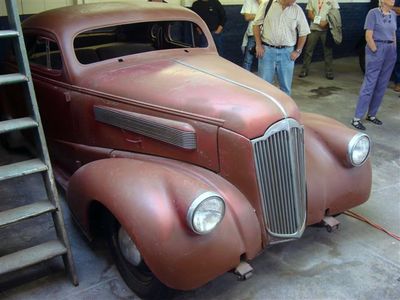 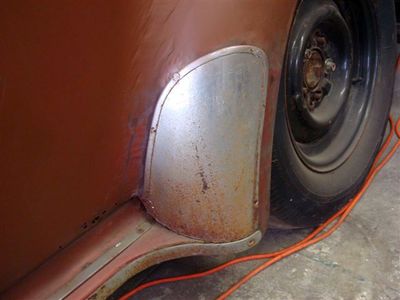 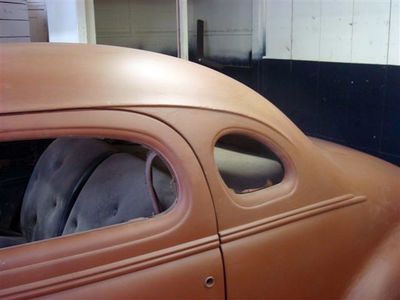 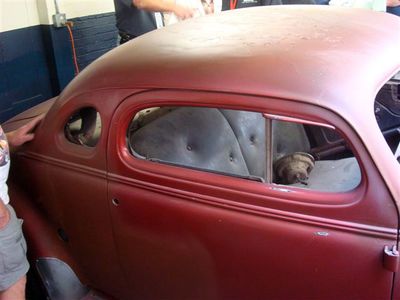 1938 Chevrolet Coupe owned and restyled by Dick Bertolucci of Sacramento, California. Dick got the car when he was 17 years old. He chopped 3 1/2 inches out of the top and slanted the back window. He decided to bring the window forward rather than adding material to it. The fenders were molded in, and the stock hood sides were replaced by 1934 Pontiac side panels. Dick later gave the car to his dad who finished it up. They put a Studebaker alligator hood on it, a Packard grille, and 1940 Chevrolet headlights down the fenders. When the bodywork was completed Dick painted the car 1948 Chevrolet Oxford Maroon with Venus Martin No. 9 gold powder added. The paint was later known as "Sacramento Maroon" or "Bertolucci Maroon" because he painted so many cars in that color. Dick's coupe featured a 270 GMC engine bored to 292 CID. He once went 107 in the quarter at Kingdon Drag Strip near Lodi, California with the car running three carburetors on alcohol.

In the late 1950s, the car was sold. It was then still located in Sacramento. The name of the buyer is unknown, but he sold the car to Jim Brown of Yreka, California. When Jim bought the car, it had been painted blue. Brown sold the car to Tom Sutter. Tom was also from Yreka. In 1963 Tom McHenry, also he from Yreka, bought the car from Tom Sutter. When McHenry bought the car it was still blue, and the block was broke on the passenger side from water being left in it and froze. Tom got another block that he bored 150 over. The engine that came with the car had Jahns pistons and a big Isky cam. The heads had partitions welded in the intake side to even up the flow. It had an outside oiler to the timing cover, and a dual 4 manifold that Bertolucci's dad had built for it. According to McHenry, "it was one strong running engine." By August 1964 the car was back on the road again. After getting the car car roadworthy again, Tom repainted it Tihisain Red. In the fall of 1966 Tom sold the car to Elliot Steele of Happy Camp, California. Tom heard that Elliot snapped a rod in the old engine, and bought a 327 375 HP crate motor to put in it. Shortly after, he went in the service, and never got around to install the new engine. The last time McHenry saw the coupe was in 1972. By then it was scattered all over an empty lot in Happy Camp. He wanted to buy the coupe back, but was unable to locate Elliot. After that the coupe disappeared.[2] After being away from the face of the earth for many years, the car was found in Veneta, Oregon in the 1990s. A young guy was in the middle of converting it to a 4 wheel drive when he got scared by all the lead on the car. The car was bought by Carl Hoganson from Eugene, Oregon. His friend Erik Sanders recognized the car as Dick Bertolucci's old Coupe, and they decided to give Dick a call before they did anything to it. Dick came to Oregon to see the car, and he brought it with him back to California again. After buying his old coupe back, Dick began to restore it back to its former glory.[1]

Please get in touch with us at mail@kustomrama.com if you have additional information or photos to share about Dick Bertolucci's 1938 Chevrolet.