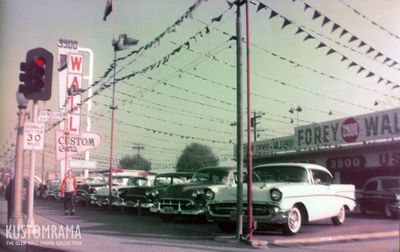 A row of mildly customized Chevrolets for sale at Wall Custom Cars in the late 1950s. Photo from the Glen Wall Photo Collection. 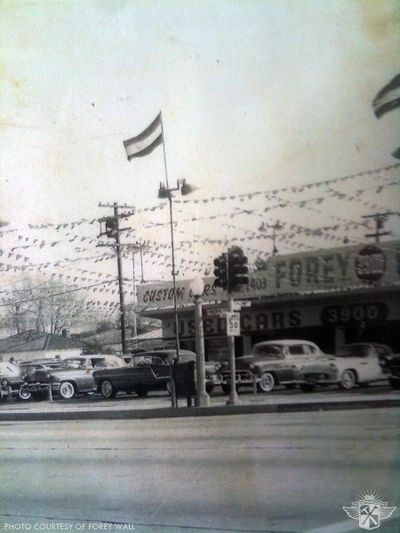 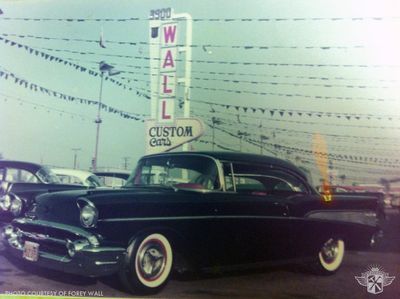 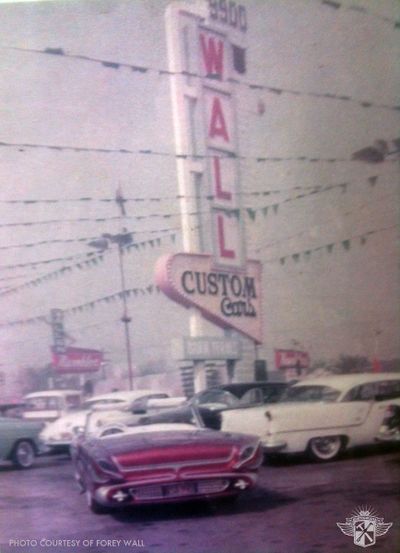 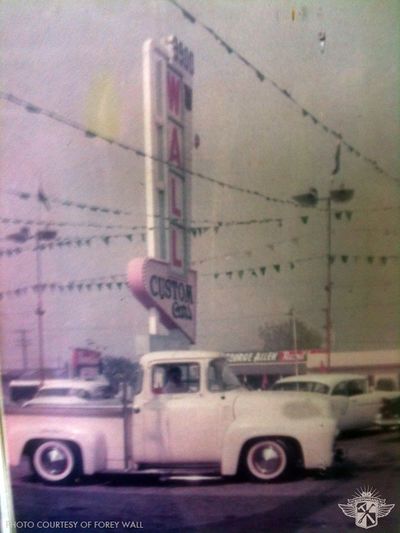 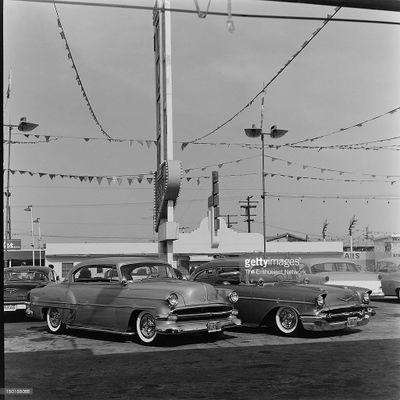 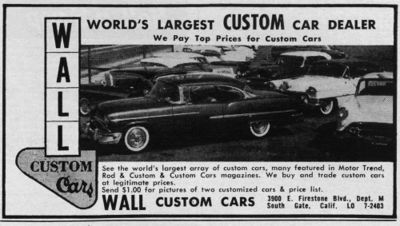 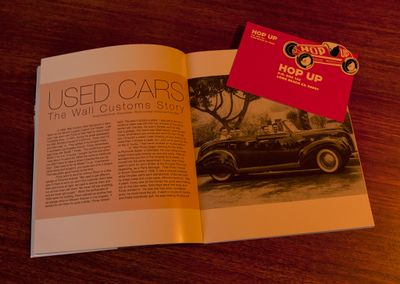 The Wall Customs Story by Sondre Kvipt was published in the Kustomrama Korner in Hop Up - Volume 13-2.

Wall Custom Cars was a custom car dealership in South Gate, California owned and operated by Forey Wall and his brother Glen.

Forey started buying and selling cars in 1946 through is own business Forey Wall Used Cars. The lot was located at 10792 Long Beach Boulevard in Lynwood, California. “At the time I was living in South Gate. I had a few custom cars for sale in the lot, but not many,” Forey told Sondre Kvipt of Kustomrama in 2016. Al Sulminoff was Forey’s partner at the lot. Al and Forey hung out together and liked to have a good time.[1] In 1954 Forey expanded his business, and he rented a bigger lot at 3900 E. Firestone Boulevard in South Gate. He kept the Lynwood lot, but he rented it out to a friend. At the time Glen had a pretty good job managing Ben Katzman’s used car dealership. During Christmas of 1954 Forey asked Glen if he wanted to go into business with him. Glen replied “You want to go into business with me? Yeah, I just rented a lot on Firestone. A whole block,” Forey replied.[2]

January 1, 1955 Glen and Forey went into business together. They had seen an opportunity in the market, and decided to form “Wall Custom Cars,” a dealership specialized in selling and buying custom cars. Mike McCarthy, a Lincoln and Mercury dealer had been on the lot before Glen and Forey. They sold nothing, so they had to move.[1]

One of the cars Glen had when they started the lot was a 1950 Mercury club coupe with a Cadillac engine. Glen had bought the Merc from Ben Katzman. Ben didn’t want to take the car as a trade-in, so he sold it to Glen for 500 bucks. They started out small, but it went overboard the first month. “The first month we were in business we sold 40 cars,” Forey and Glen recalled. When other dealers got hot rods and custom cars in on trades, they didn’t know what to do with them, so they would call Glen and Forey. “We would buy them cheap, as they wanted to get rid of them. We would sell them and make pretty good money. 500 or 600 dollars,” according to Forey.[1]

A Mexican kid named Reuben Vallodlid worked with Glen and Forey at the lot. Reuben, who had worked for Forey before, lowered the cars, while Glen was doing the mechanical work. Reuben and Glen were working together, while Forey took care of the office. “A guy used to come around selling lowering blocks, and we used to buy a case of lowering blocks. 2 inch, 3 inch and 4 inch. We also bought cases of hubcaps. About a dozen at the time,” Glen remembered. They used to take the hubcaps off the cars at nights so kids wouldn’t steal them. The good cars they were afraid off they kept in the showroom.[1]

Keith Christensen at Gene’s Mufflers did all of their muffler work and tires and wheels. “Everything we did, we had to do perfectly as they were very particular, which is essential for a quality car lot,” Keith told Sondre in 2017. “I was always very impressed in their manner and how nice they always dressed. Truly professionals.”[3]

The salesmen that worked for Glen and Forey got a 100 dollar bonus when they had sold 40 cars. “We used to have 80 cars at the lot. 1949 - 1950 Oldsmobiles were good sellers. Slant backs and holiday coupes. They were fast and kids loved them. We used to lower and nose them. We took a lot of cars to paint shops. Vern and Harry had a shop in Lynwood, and they did the paint and metal work on most of our cars. Vern was the metal man, and Harry was the painter. It was a small place and they did paint jobs for 50 bucks. They were good. They did a good job,” Forey recalled. The first year Glen and Forey were in business, Glen also went to Barris Kustoms once to have his 1950 Cadillac restyled. He took it to George Barris, telling him that he wanted to have 1952 taillights installed. “The 1952 Cadillac had a backup light right below the taillight. I went down there one week, and George told me the car would be ready next week. I returned after a week but my car was not around, so I asked George’s brother, where’s my car? Oh, my brother is driving it he said. I got my car back the next day, and George would not get any more work from me.” Glen was not happy due to the fact that George had the car for over a week and never touched the taillights, meanw,hile he was driving it around town.[2]

The Baron and Roth

As pinstriping became an attraction in every used-car dealership on Firestone Boulevard, Glen and Forey began offering pinstriping as a regular option. The Baron and Roth used to pinstripe cars on the lot. According to Forey, the Baron was the best. “He used to work for Ford Motor Company, striping the wooden spokes on Fords. He came with a bottle of whiskey, and by the end of the day the whole bottle was gone. He drank like a fish! They used to do our pinstriping, and they never paid any rent or anything to pinstripe on our lot. We let them do it for free, because on Saturday all the kids would come on over and see them do it. They also pinstriped and flamed cars that kids had bought from us. Sometime I would call them in the week, and they would stop by to do our jobs. They came in Saturday mornings, and striped all day. It was a good deal for both of us!”[1]

By 1959 Forey and Glen advertised their lot as the “World’s Largest Custom Car Dealer.” According to an ad they ran in Motor Trend magazine, they were paying top prices for custom cars. By then other dealers had seen what the Wall brothers were doing, selling all those custom cars, so they had started doing the same thing.[1]

“All of the cars on the lot were ours, so we took out the ones we wanted and used them before selling them off. In 1959 I told Glen I’m gonna go down and buy us each a new Cadillac. I bought a black one and a silver one. I knew Glen always liked black, so I let him have the black one. Glen put Eldorado sidetrim on his. People thought he was nuts for drilling all the holes in the body of the Cadillac.”[1] Glen also dressed his Cadillac up with dual Appleton spotlights and Continental Kit. “I had a friend who worked at a continental kit place, and he gave me a kit for a Cadillac and a 1955 Thunderbird that I bought new.”[2]

“After 11 years in business, we had to move because we lost our lease in 1966.” Glen and Forey moved their business to 9665 Alondra Boulevard in Bellflower. At the time Forey was also in the construction business, so he built a 100-foot building where they could work on cars. The building also housed offices and bathrooms. As Forey was busy in the construction business, Glen took over the used car dealership. The location was not as good as the location in South Gate, and the business never did as well as it used to.[2]

In 1966 Forey couldn’t borrow more money to build more houses, so he had to give up the construction business. He sold out to his partner, and went back to the car business. “I rented a lot down at Lakewood Blvd., on the other side of Artesia. I ran that for a few months before I moved up with Glen.” At the time Glen had run the custom car business on his own for 5 years. He sold the lot to Forey, and went on to open up Glen Wall Used Cars on Lakewood and Compton Boulevard. Glen ran the new lot for about 14 years before he in 1982 gave it to Forey and moved up north to Pleasanton, California with his wife Freida. Glen left the car business and went to work for his son in law at Air Factors. His son in law owned the business and they manufactured air distribution systems for commercial buildings. 85 years old he retired. Forey was in the car business for 50 years and kept selling used cars.[1]

Please get in touch with us at mail@kustomrama.com if you have additional information or photos to share about Wall Custom Cars.