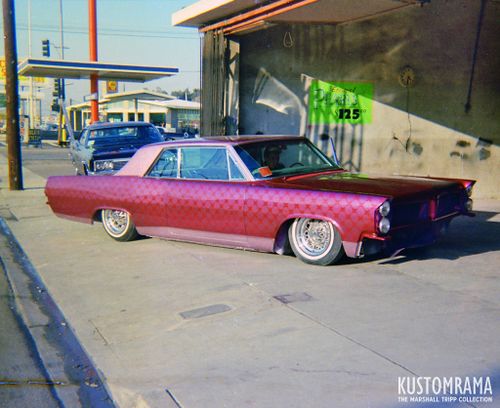 "I have admired many of the great paint jobs on customs in the past few years. I recently saw one of the multi-colored many paneled jobs and it included Metalflake. Having painted metalflake I wondered how the glass like even clear coat was achieved with the flake next to a candy or pearl color. I figured it out quickly but let me tell you about one I didn't guess the procedure so quickly. Back in 1967 I was working for Larry Watson at the Lakewood/Artesia location. Sanding and masking were my jobs and it was a long time before Larry let me spray primer. Doug Carney brought his 63 Grand Prix in for a full custom paint. It had lifts front and rear and the interior was a "chick magnet". Buick wires with little mirrors in the center cap. I liked this car already but after it had it's Fuchsia color with tasteful Metalflake trim with webbing I loved it. For me, this was the ultimate car. The car only needed its color sand and rub and it was done, or so I thought. I liked this car so much I still have some of the masking material from the Fuchsia color. When I came to work in the morning it sat there with the addition of the "Silhouette" effect on the sides. Larry had stayed late and put the finishing touch on this car. Lace painting was born with what Watson called Silhouette painting. I remember seeing an ad somewhere saying "Come to Watsons and see the new Silhouette paint job." This car became a sensation all over Southern California. All of the sudden people were showing up every day to see it. Larry never told me how it was done but others figured it out. By the time of the next car show, there were 3 or 4 other lace paint jobs but none could touch the Pontiac. You can't beat Larry for tasteful color combinations. I've since figured out how to do this type of paint. Now, the Pontiac has those big flat sides and it's easy to see how the material is laid out on the sides, but the wheel wells come out from the body. How does the lace material stay flat where the body comes out?" Photo courtesy of Marshall Tripp. 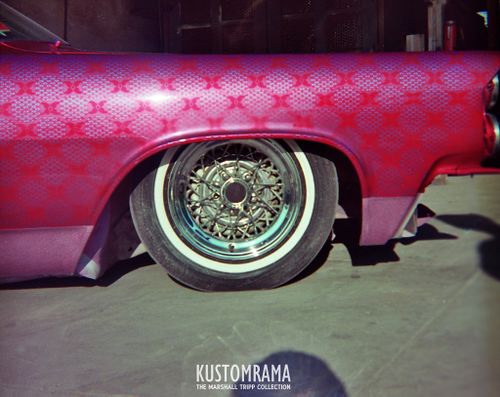 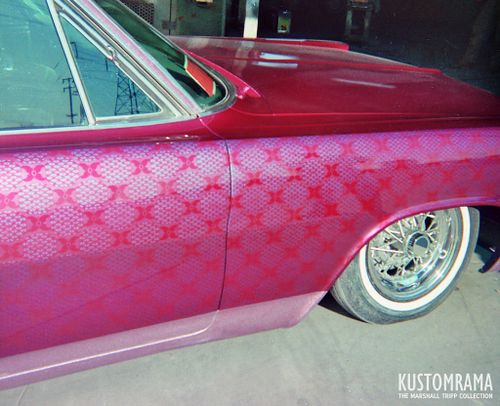 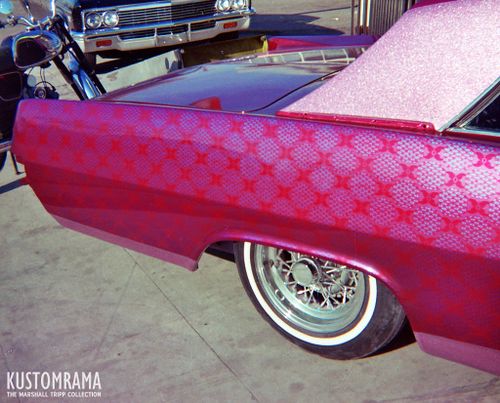 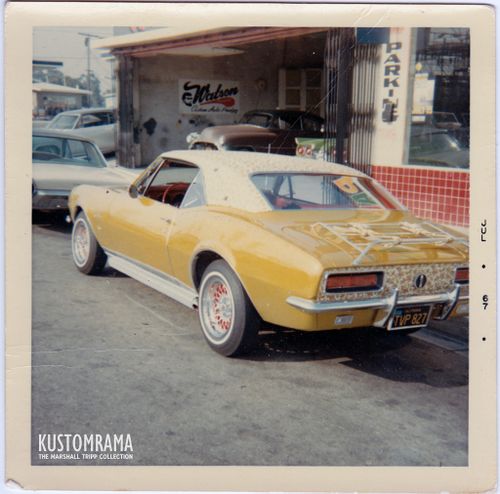 A Barris Kustoms restyled Camaro. "We were at the Watson shop one day when this car rolled up. We all went out to look and found out it was a Barris car. The car was there so Larry could see the new leopard print vinyl top. It may seem cool now but at the time we all looked at each other and wondered who in the world would want such a thing. We thought it was hideous. But, once again George Barris was ahead of the curve! Again, Barris was out front in the style department! I believe Junior conway painted it. It may have been a hit on Hollywood Blvd but seemed out of place on Bellflower Blvd. When I look at this picture now I like this car." Photo courtesy of Marshall Tripp.

Marshall Tripp worked for Larry Watson at Watson's Custom Auto Painting between 1966 and 1967. At the shop, Marshall did paint prep, sanding, and masking. In 2011 Marshall told Kustomrama that he used to take Larry places to pick up a car; "Especially to Peter Satori Rolls Royce in Pasadena." At the time Marshall drove a flamed 1951 Chevrolet Fleetline. Marshall got the car in the spring of 1965, and he painted flames on it right after he got it. It was his first flame paint job, so he was pretty proud when Watson told him that he liked the flames. In 1967 Marshall was drafted into the Army, and he was sent to Vietnam.

Before Marshall got drafted he helped Larry Watson clean out of his old office at 14903 Lakewood Blvd, as he had recently moved down to the corner of Lakewood and Artesia. Marshall put hundred of pictures and items in boxes that Larry gave him. Marshall kept on to everything all these years, and he has now scanned and shared the photos in the collection with Kustomrama. We will present the photos on this page, along with stories from Marshall. Many of these photos are also advertised for sale on ebay, so be sure to check out his items and add Marshall to your favorite seller list.

Please get in touch with us at mail@kustomrama.com if you have additional information or photos to share about The Marshall Tripp Photo Collection.