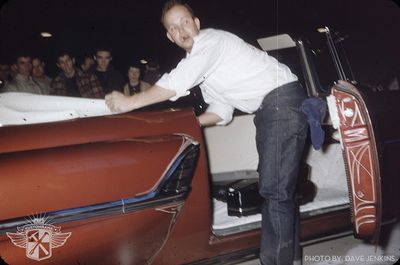 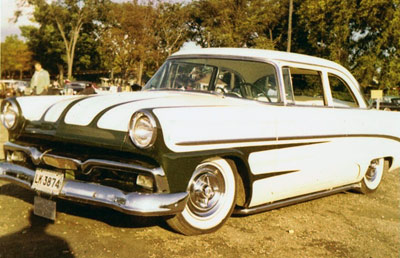 Jerry Drake's 1955 Ford Fairlane of Lansing, Michigan was restyled by Ed Blaisdell of Blaisdell Body Shop. Jerry is a well known Michigan pinstriper that operated under the name "Spider the Crazy Painter." He bought the Ford, known as "India Ivory" in 1957, and it went through several modifications between 1957 and 1959. Paul pinstriped "India Ivory" in 1958. The job was done "on the floor" at the 2nd Conquerors Autorama in Lansing. 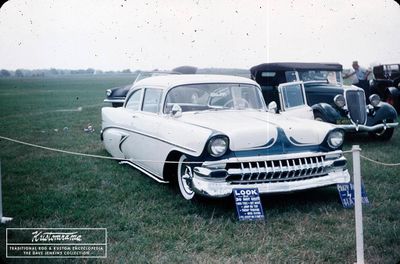 A 1956 Chevrolet that featured a scallop paint job by Paul. Photo by Dave Jenkins. 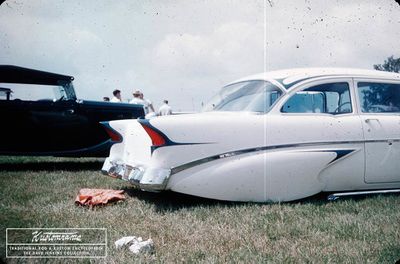 A rear end shot of the 1956 Chevrolet custom. Photo by Dave Jenkins. 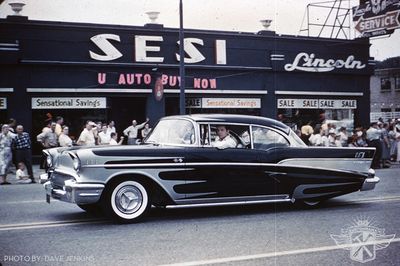 An early incarnation of Dave Jenkins' 1957 Chevrolet Bel-Air as it appeared in 1958. This version featured Jimmy Jones Bubble Skirts and a silver scallop paint job by Paul. The scallops were applied over the stock factory paint. 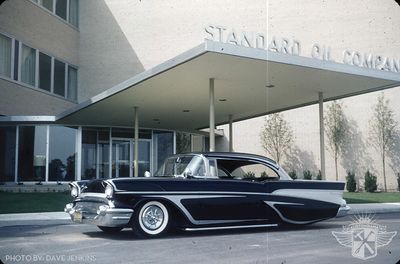 A second incarnation of Dave Jenkins' 1957 Chevrolet Bel-Air as it appeared in 1959. This iteration featured a second scallop paint job by Paul. 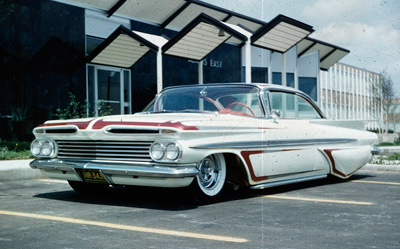 Dick Rothfuss' 1959 Chevrolet Impala of Ann Arbor, Michigan. Known as "Poopsie", Dick's Impala was restyled late 1959 - early 1960. It was dressed up with one of Paul's signature scallop paint jobs. 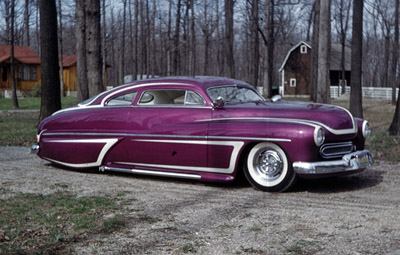 Dick Bailey's 1950 Mercury "The Dream Boat. Restyled by the Alexander Brothers, the build was started in 1959 and completed in 1961. It was dressed up with one of Paul Hatton' signature scallop paint jobs. 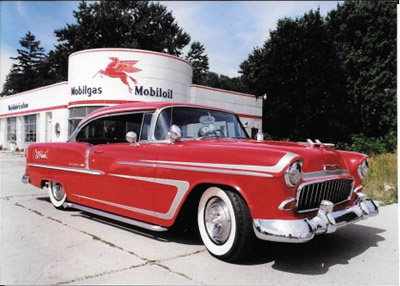 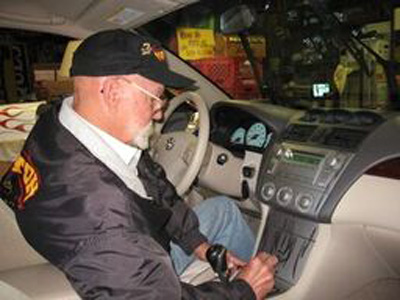 Paul pinstriping Gary Oliver's Toyota dashboard. This was propably the last dash Paul striped, and he told Gary that it was his first Toyota. Photo courtesy of Gary Oliver.

Paul was born in Richmond, Kentucky in 1933. At the age of eight, he moved to Michigan.[1]

Paul began building hot rods in 1949, 16 years old.[2] He learned the trade of custom painting and pinstriping, and after graduating from high school, Paul had already built a strong reputation in the area for his custom paintwork. He opened up his own custom shop, Hatton Enterprises in 1951.[3] In 2018 Gary Oliver told Sondre Kvipt of Kustomrama that he remembered Gary telling him that he used to charge $10 to pinstripe a dash, and $5 to paint the name on the back fenders when he first started. "I remember he charged me $80 to scallop my 1955 chevy in 1960 and then charged me $800 to do the duplicate of that car in 1984. What a talented man he was."[4]

In 1953 he worked for the Kaiser-Frazer Corporation.[3]

April 12, 1954 Paul married Barbara Wilson. Paul and Mary remained married until her death in 2010, and they had four children together.[1]

In 1955 Paul joined the Army, and he spent two years serving in the Korean War. As a member of a special services squadron, Paul earned a reputation as a first-rate artist and was commissioned to paint Jeeps and speed-limit signs.[3]

In 1957 Paul returned to Detroit, where he reopened his shop.[3] The new shop was named "Hatton's House of Crazy Paint." He was kept busy striping dashboards, doing scallops and painting creatures on quarter panels and bubble skirts.[2] Paul used to do a lot of pinstriping at car shows back in the 1950s. All promoters encouraged pinstriping "on the floor" because it drew crowds.[5] As the word slowly began to circulate about Paul's work, business began to skyrocket. “It caught on good, and from the late 1950s through the 1960s and 1970s, I was almost busier than I could handle,” he said. “We used to say there was a guy named Von Dutch from California who was the only one putting stripes on cars west of the Mississippi River, and I was the only one in the east.”[3] According to local historian and author Fred Thomas, "Paul was the most popular name for flames and scallops in Detroit and Southeast Michigan," in the fifties.[6] In 2018, Lansing, Michigan pinstriper Jerry Drake told Sondre Kvipt of Kustomrama that it was quite common for Paul to ask for an "Exclusive" on a show, "which meant that he was the only pinstriper allowed to "work" on the show. However, since he had done work on "India Ivory" and knew me and my work, Paul would let me "work" on the show with him. I remember times when we would be "working" the same car at the time. Paul would be doing pinstriping on the outside and I would be painting some weirdie on the dash. Of course, with the two of us doing this it would be a large crowd to the car. The owners liked this. These times were some of the highlights of my life.'"[5]

In 1962 Paul was commissioned by Ford to help design the stripes on a clay prototype model of the 1965 Ford Mustang. He would later paint the stripes on the cars with his own hand after they were manufactured on the assembly lines. “They had an expensive machine that was being built for the painting, and it didn’t work so they started hiring me to put the brush on freehand,” he said, saying that he must have painted about 2,000 to 3,000 cars himself from 1965 to 1968.[3]

When the 1968 Oldsmobile Hurst Cutlasses came out, Paul was hired to stripe 500 of them.[3] When the cars came off the assembly line in Lansing they were sent to a place called Demmer Tool & Die for retrofitting. Paul striped the cars there. In 2018 Willis Dennis told Sondre Kvipt of Kustomrama that his friend and local Lansing, Michigan custom painter and pinstriper Gary Glenn was hired to stripe the Oldsmobiles first; "He striped the first five cars with red paint. He told me that he was not fast enough to meet the Demmer daily production goal so he called Paul Hatton to do the job. Paul striped the remaining 500 plus cars with white stripes."[7] Dave Edmonds and Bill Scott worked at Demmer, and they both used to watch Paul stripe the Oldsmobiles. Dave and Bill told their buddy Jerry Drake that they had never seen anyone stripe so fast. His speed just "blew them away".[5] Paul had one month too complete them all by the end of June. He painted 20 cars a day for $20 a piece. As the story goes, other production workers became upset about Paul's pay, which amounted to about $10,000 that month. In response, Jack "Doc" Watson, manager of the project, said he'd hire anyone who could paint as fast as Mr. Hatton. Several tried. The cars were found painted white the next day to gloss over their failed attempts. There were no more complaints about Paul having the job after that.[3]

In another private job at a Hurst plant in Kenosha, Wisconsin, Paul would paint 1,220 1969 Rambler Scramblers at a rate of 50 cars per day. “It was all freehand with a brush, and I can generally go around a car quick,” he said. “I’d start at five in the morning and by five in the afternoon I’d have 50 cars done.”[3]

Please get in touch with us at mail@kustomrama.com if you have additional information or photos to share about Paul Hatton.