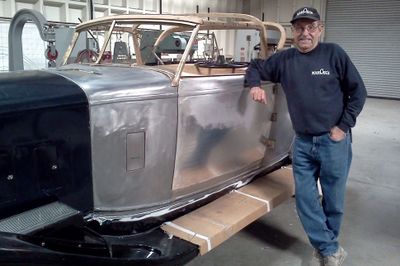 A photo of Marcel on his older days. Photo courtesy of the De Ley family, from Hemmings.

Marcel De Ley was a master metalshaper born in Belgium.[1]

14 years old, during World War II, Marcel left school to go to work building cabs and bodies for military trucks. Over the next 20 years, he continued to build his skills as a metalshaper.[1]

In the late 1950s Marcel built a custom car for himself. According to an interview, his son Luc De Lay did with Daniel Strohl of Hemmings, an American soldier named Chasten Bowen spotted the car while he was stationed in Europe and offered a deal; "In exchange for building another custom car, Bowen would set up Marcel with a job in a collision shop and sponsor American citizenship for Marcel and his young family." The build was started in Belgium in brought to California around 1962 or 1963 to finish. It was a Ford Taunus-engined two-seat custom sports car.[1]

At the collision shop, Marcel began hand-shaping hard-to-find or impossible-to-find parts for exotic and rare cars like Ferraris and Duesenbergs. In 1974 he decided to open up his own shop Marcel’s Custom Metal in Corona, California to replicate or repair rare auto bodies on a full-time basis.[1]

Both Marcel's son Luc and his brother Marc began to learn metalshaping and work alongside their father, and over the years the shop has turned out bodies for people like James Hetfield, Chip Foose, Rick Dore, Roy Brizio, Boyd Coddington and Jerry Kugel.[1]

Marcel and Marc retired from the business around 2011, leaving Luc to run the shop. Marcel did so due to a declining health. He started to feel better son afterward, and about a month later he started helping out a bit. Then another month later he was in the shop for five days a week. That lasted until 2014 or so when his health began to decline again. May 21, 2018 he passed away, 89 years old.[1]

Please get in touch with us at mail@kustomrama.com if you have additional information or photos to share about Marcel De Ley.