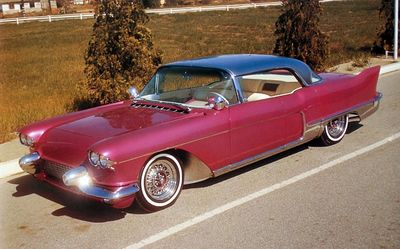 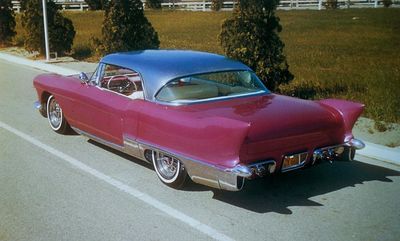 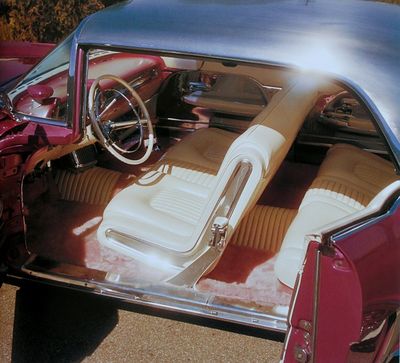 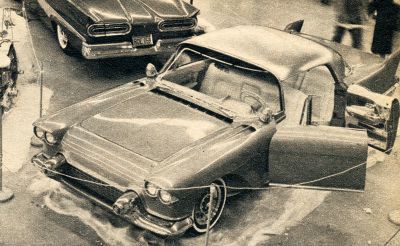 1957 Cadillac Eldorado Brougham restyled by Bill DeCarr for Larry Watson of Bellflower, California. The 1958 Cadillac Brougham were hand-built factory customs only produced 700 units for 1957 and 1958. After Larry finished his 1959 Cadillac, it did not last long before he was offered by a dealership to trade a fairly used Brougham for his custom Caddy. The cars cost $13000 new, and Larry did not hesitate to swap cars. Bill restyled the front by relocating the fender air-scoops into the front bumper dagmars, exchanging the stock rubber tips with the horn bezels. The lower part of the front bumper was painted and the trim surrounding the grille was removed. The trim teeth located in the factory indentations were removed. The deck lid was shaved and the trim on the fins were removed. The taillights incorporated in the fins were moved and 1959 Cadillac taillight lenses were mounted in the rear bumper. The door handles and the ribs in the exhaust outlets were discarded. All the bodywork was done in lead. Eddie Martinez of Lynwood reupholstered the interior in pearl white with pleats in the seats centers and on the transmission hump. A new carpet matching the exterior color was created from Meganta mouton fur. All the inner sills were chrome plated. Finally Larry painted it Candy Raspberry Platinum Pearl, however he kept the stock brushed stainless top alone. He used 30 gallons of paint while painting it, and as a result, he created an outstandingly translucent color. The car also featured dummy spots and Cadillac wire wheels wrapped up in thin whitewall U.S Royal Master tires. The rims featured capless centers with chrome lug nuts. Factory air ride was standard on the Brougham's, sparing Larry the trouble of lowering it.[1] In 1961, the car received over 21 awards including four sweepstakes, three best interiors, plus several first place awards in its class.[2]

The car was sold and later seen a few years later with a cheap white repaint and a filthy and messy interior. However, the car has survived amazingly survived and is currently belonging to a Texas man who intends to restore it back to stock condition.[1]

Please get in touch with us at mail@kustomrama.com if you have additional information or photos to share about Larry Watson's 1957 Cadillac.