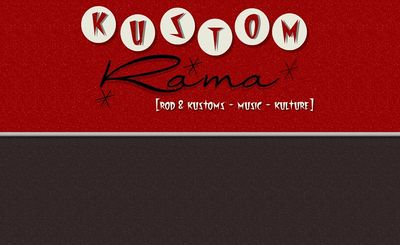 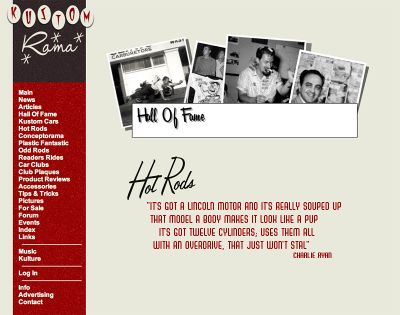 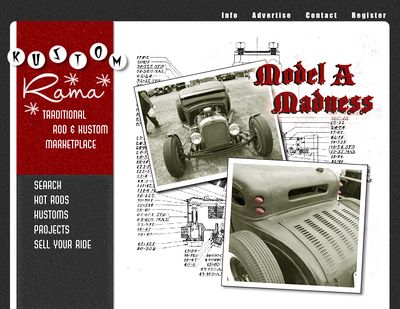 07-14-2005: Launched from a dorm room in Boston, MA, Kustomrama was relaunched as an Online Marketplace for Traditional Hot Rods and Kustom Cars in July, 2005 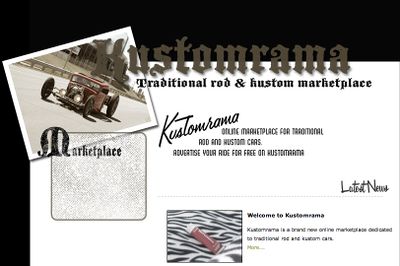 12-24-2005: Sondre spent his Christmas vacation designing a new layout and logo for Kustomrama 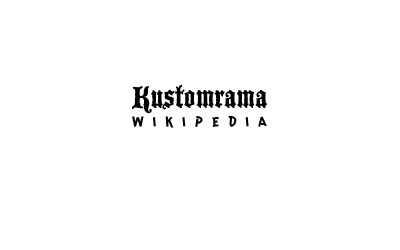 01-05-2006: The redesigned version of Kustomrama featured a brand new wikipedia. This is the logo Sondre designed for the Kustomrama Wikipedia. 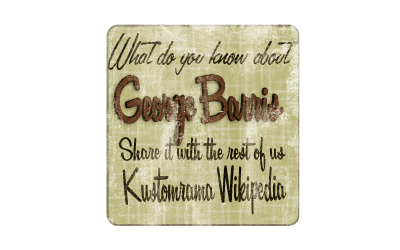 01-05-2006: A banner Sondre designed for the Kustomrama Wikipedia. George Barris was topic of the week. 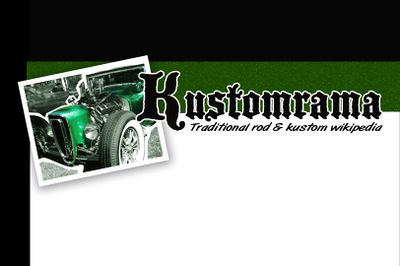 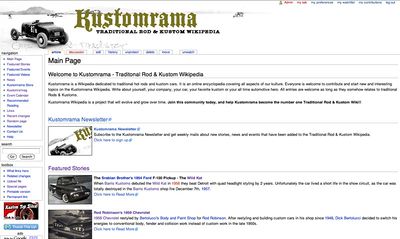 10-31-2007: What was supposed to be a redesign ended up as a brand new concept. The Kustomrama Wikipedia was born. 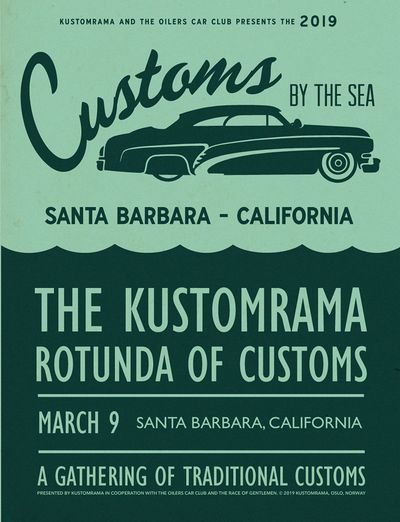 Kustomrama's 1st Customs by the Sea in Santa Barbara, California will be held March 9, 2019.

Based in Oslo, Norway, Kustomrama is a wikipedia dedicated to traditional hot rods and kustom cars. Its founder Sondre Kvipt wanted Kustomrama to be an online magazine dedicated to traditional hot rods, kustoms, rockabilly and its related kulture. The first version of the website was made and run locally on Sondre's computer, March 15, 2005 and contained the following sections: News, Articles, Hall of Fame, Kustom Cars, Hot Rods, Conceptorama, Plastic Fantastic, Odd Rods, Readers Rides, Car Clubs, Club Plaques, Product Reviews, Accessories, Tips & Tricks, Pictures, For Sale, Forum, Events, Index, Links, Music, and Kulture. The site was so far only soft launched, and contained 2 articles under the Hall of Fame section. One about Von Dutch, and one about the Alexander Brothers.

During the spring of 2005 Sondre continued to work on his project. What had started out as an online magazine evolved into an online marketplace for traditional hot rods and kustom cars. In May, 2005 Sondre moved to Boston, Massachusetts for the summer in order to study an advanced entrepreneurship program, and work on an internship program. After school and work, Sondre spent many of his evenings working on Kustomrama and trying to get his classifieds section to work. He hadn't worked too much with PHP so far, so the progress was very time consuming. By the 14th of July, 2005, Sondre had solved the classified puzzle, and could finally launch the second version of Kustomrama. Sondre had also designed a new format for the site before he launched the second version. Kustomrama was now basically an online marketplace for traditional hot rods and kustom cars, but also contained featured stories and news related to hot rods, kustoms, music and kulture. The first featured story on the new Kustomrama website was a story Sondre wrote on Jeff Motes' 1938 Austin Bantam. Sondre found the car for sale on eBay, and thought, "Damn, that would have been a nice car to cruise around in while studying in Boston." He never bid on the car, but contacted Jeff and asked if he could do a story on it instead. Sondre also wrote a featured story on this car for Rolls & Pleats Magazine when he returned to Norway in August, 2005. The first car ever that was posted for sale on Kustomrama was Teemu Tourunen's 1941 Chevrolet Coupe from Finland. Teemu's Chevy was also the second car featured on Kustomrama.

December 24th, 2005 Sondre was spending his Christmas vacation creating a new design and logo for Kustomrama. The new design was published the first week of 2006. The flake look was now replaced by a cleaner black and white background, with fonts and elements that looked old and well used. A photoshopped picture of Jeff Motes' 1938 Austin Bantam was incorporated into the new layout. When the third version of Kustomrama was launched, it featured a brand new section called the Kustomrama Wikipedia. Sondre wanted to connect everything he wrote in the magazine to a dedicated Traditional Rod & Kustom Wikipedia. Each month he wanted to have a topic of the week on the wiki that he published on the main page of Kustomrama. By now Kustomrama had approximately 30 unique visitors each day. Many of these visited the Wikipedia, but none seemed to know how it worked. So after running the wikipedia for about 2 months Sondre gave it up and deleted its files from the server he was hosting Kustomrama on.

After running Kustomrama as an online marketplace and magazine for 2 years, 7 months, and 12 days, Sondre decided that it was about time do redesign the site in October 2007. Until now Kustomrama had been a static website that had required manual programming each time Sondre published a new story. he was tired of this, and while working on the new design Sondre browsed around the web trying to find am open source content management system he could build Kustomrama on. While doing his research, Sondre remembered the wiki he had launched almost 2 years earlier. Maybe his readers were ready for a wiki now? It would have been great if the readers of the site also could contribute to the Kustomrama website. Four days later, the 31th of October, 2007 Sondre had installed Mediawiki software on his server, designed a brand new layout for the site, and he was ready to launch the Kustomrama Wikipedia once more. Gone were the classifieds and rockabilly content. Sondre wanted the 4th version of Kustomrama to be a Wikipedia solely dedicated to traditional hot rods and kustom cars.

Please get in touch with us at mail@kustomrama.com if you have additional information or photos to share about Kustomrama.