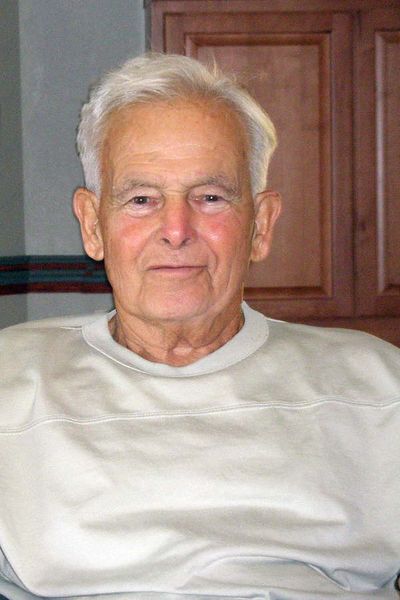 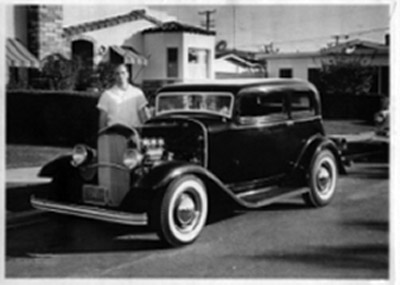 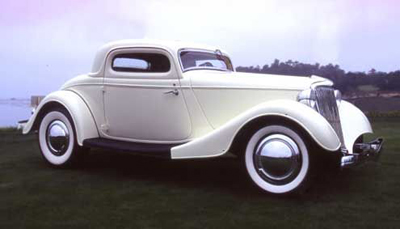 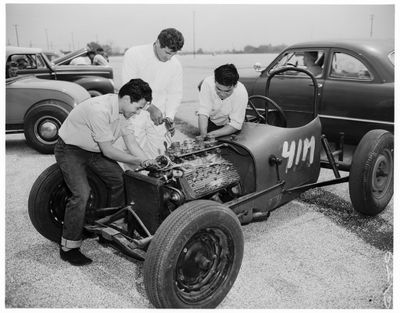 Founding members of the Bean Bandits Carlos Ramirez, Mike Magem and Joaquin Arnett with their modified roadster at Pomona in 1952. The body was made out of old car hoods and the frame out of water pipes.

Joaquin Arnett (November 27, 1927 - September 24, 2010) was born in San Diego Old Town, California. He went to Stockton Elementary School and Memorial Jr High School. Joaquin's interest in cars started at an early age, according to his friend Carlos Ramirez, he and Joaquin learned to drive at about 8 or 9 when they sneaked their family cars out while their fathers were at work.[2] Joaquin did not take any shop classes in school. He lost interest in school and began working on his own interests. He had a paper route to earn money to work and get cars. The first car he obtained was an old junked car he purchased when he was around 13 years old. He used the car to drive his mom and her friends around to do their shopping and errands. A nearby welding shop was where he learned how to weld. He began to repair cars then went on to build, chop, weld and modify them. He attended Stockton Elementary School, and a school in Tijuana, Baja Norte, Mexico. He then went on to Memorial Jr. High School, and San Diego High School. He joined the Merchant marines, and was on the S.S.Ina Coolbirth, he was discharged in 1945 after a severe illness acquired on ship.[3]

Upon his discharge, Joaquin married Viola Marie Ceseña, on September 8, 1945. They had a civil ceremony at the courthouse. He liked to tell the story that Viola’s mother Josephina Ceseña, was upset at this civil ceremony. When they came home, whe marched them to the Christ of King Catholic Church to get married in the church. “So we got married twice in one day,” he said many times to his daughter Jackie Arnett. At the time of his wedding & honeymoon Joaquin was driving a chopped black 1932 Ford sedan. He had worked on this car in the shabby wood garage on “J” street. Joaquin had a strong urge to go fast, and he began to build roadsters and experiment with engines. His buddies shared this interest with enthusiasm, and they all wanted to go fast.[3] He was racing at El Mirage and Muroc with the Road Runners. In 1949 Joaquin and six friends formed the Cam Pounders car club. The club was recognized by the Southern California Timing Association. These six additional original members were Mike Nagem, Andrew Ortega, Carlos Ramirez, Bill Gavin, Louie Najera, and Harold Miller. in 1951, the club changed name to the Bean Bandits Car Club. The name was taken from their first race car.[2]Joaquin was the brainchild and mastermind of the Bean Bandits, and he designed, built, and drove cars that broke and set many records. Joaquin's true passion was trying to make his amazing creations go faster and faster.[4] The Bean Bandits had a reputation for winning in cars that appeared crude, but benefitted from Joaquin's imagination and fabrication talent. Joaquin was one of the first racers to experiment with lightweight tube frames, slingshot dragsters and nitromethane[2] Between 1951 and 1954 the Bean Bandits won between 350 to 400 trophies.

Joaquin built a 1934 Ford coupe in the early 1950s. It was sought after and finally purchased by Andy Granatelli for $3,000.00. This was a lot of money back then. This spurred his interest further. And added to Joaquin’s enthusiasm for working with cars. Joaquin began to make a living building engines for others, and he and the club raced throughout the 1950s, setting track records and recording speeds as high as 154 MPH in 1957. By 1960 drag racing became too expensive, and it was time for the club to settle down and raise their families. The club stopped, and didn't race for the next 28 years.[4]

In 1988 Joaquin and his sons, Sonny Arnett and Jeff Arnett built a streamliner. The club had a reunion and decided to resurrect the Bean Bandits. The club still had the famed wedge roadster and built several replicas of the Bean Bandits dragster, one of which is on display in the Don Garlit's Drag Racing Museum in Florida.With the Bean Bandit display the club raced the dragster and roadster at the Antique Drags held at Carlsbad, Los Angeles Raceway, and Sacramento. The streamliner was run at El Mirage and Bonneville Nationals. Several new records were set by Sonny Arnett for unblown streamliners running a variety of engines. A 1951 Mercury engine with Ardun heads at over 202 mph, a small Chrysler and 333 Hemi at 227 mph. And an average speed of 231 mph at Bonneville. During this time Joaquin built 2 more streamliners.[4]

In March of 1992 the Bean Bandits were honored by the National Hot Rod Association at the Pomona Drag Strip. It had been 40 years since Joaquin had won the 1st NHRA Top Eliminator trophy. In November of 1994 Joaquin was honored with a National Hot Rod Association Life Time Achievement Award for his immense contribution to the sport of drag racing held at the Bakersfield NHRA Hot Rod Reunion where a plaque is on display in commemoration of Joaquin's achievements. May 1995 tragedy struck, as Sonny Arnett lost his life while driving the Bean Bandit Mark III Streamliner at the dry lakes of El Mirage. Traveling at about 260 mph it was thought that the car ran over piece of metal debris on the course causing a tire to blow out. As a TV crew was at the event doing a feature on the club camera men caught the horrific event. It was to be seen on national television leaving an indelible impression on the race world.[4]

In 1997, two years after the accident, Joaquin built a new streamliner with built in safety features to avoid rolling. Jeff Arnett drove the Streamliner, and turned good times at over 240 mph at the Bonneville Nationals. In September of the same year Joaquin was inducted into the Dry Lakes Racing Hall of Fame in Buellton, California at Jack Mendenhall's Gas Up Museum. After a close call with a fuel fire at Bonneville, lack of people to help run the cars, health issues, and the aging of members, Joaquin decided to put the racing on hold. Before doing so he chose to induct Julio Hernandez and Fabian Valdez in to the club so that they could continue to keep the Bean Bandits legacy alive.[4]

September 24, 2010 Joaquin passed away after battling alzheimer's and bout's with pneumonia.[5]

Please get in touch with us at mail@kustomrama.com if you have additional information or photos to share about Joaquin Arnett.