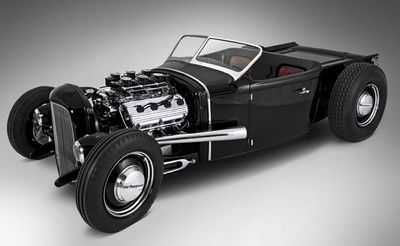 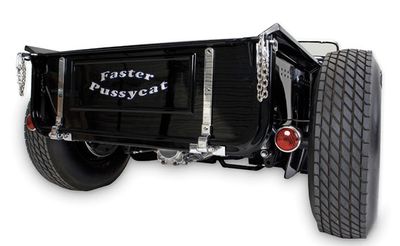 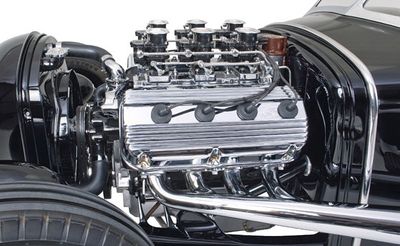 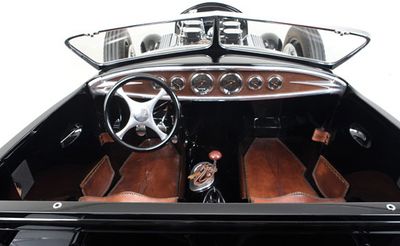 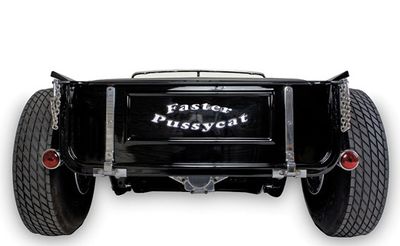 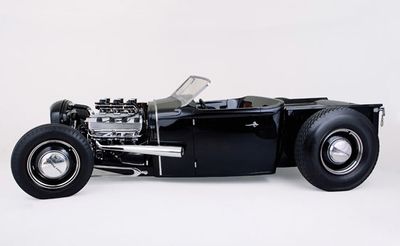 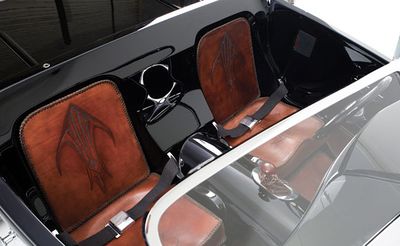 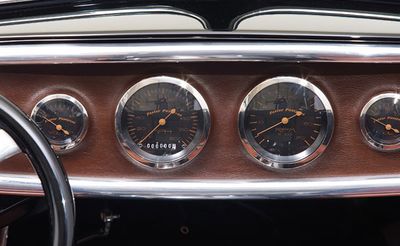 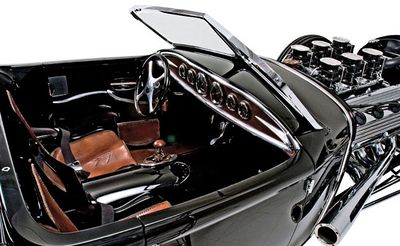 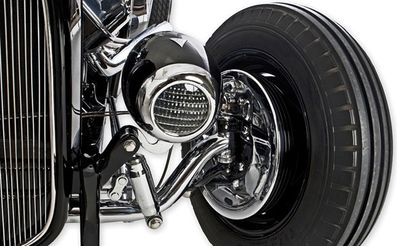 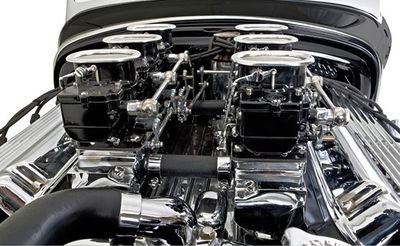 1930 Ford Model A Roadster Pickup built by Jim Benitez and the team at the Jalopy Shoppe in Escondido, California. The car is named "Faster Pussycat", and the team Benitez worked with on the project: Josh Johnson, Louis Garcia, Wade Delco, Rodrigo Mogollenes, and Chris Thompson. They will be happy to tell you that Jim leaves no stone unturned in building the perfect car.[1]

Originally started as a project to create something more exciting than what he had seen in the past few years, it evolved into a project to create the best roadster pickup possible. Somewhere down the road, after about three years, it turned into an obsession to shoot for the prestigious America’s Most Beautiful Roadster Award (AMBR), a project that took over six years, countless man hours, and $225,000 to complete.

No stranger to the Grand National Roadster Show in years past, “Faster Pussycat” had been seen at the Jalopy Shoppe display booth for the past two years – initially on display as just a finished frame, then in just bare metal, and finally making its first official finished appearance this year in 2009. All the hard work paid off, culminating with the car taking home two prestigious awards. “Faster Pussycat” was awarded the AMBR Outstanding Class Award and the Blackie Geijian Award of Excellence; Jim Benitez’s vision had finally come full circle. Currently featured on the cover of Rod and Custom Magazine with an article by Tim Bernsau, “Faster Pussycat” is receiving nationwide attention, and it is easy to see why.

The project kicked off with a steel Brookville body, which then led to incorporating a completely custom built chassis formed out of square tubing. Next Jim decided that he wanted her to have “all the horsepower she could take” and managed to squeeze in a 392 Hemi combined with 11.0:1 compression which was bored 0.060 over, producing an estimated 400 bhp and 500 pound feet of torque. The 392 Hemi block and heads are painted to match the vehicle, which was fitted with a Schneider cam for maximum torque, according to Jim. The engine also received O’Brien Truckers valve covers, a cast valley timing cover, an Offenhauser manifold, and six original Stromberg 97 carburetors with Wilcap carb tops that are fitted with stainless steel screens for a stylistic effect.

All of that power is handled by a Hurst-shifted Richmond five-speed transmission, with 3.50:1 gears, a limited-slip differential, and a Larry Phillips-built chrome driveshaft. Stopping power comes by the way of 1939 Zephyr brakes mounted to a 6-inch dropped Speedway axle with 1940 Ford spindles in the front and a Speedway quick-change with Currie axles suspended by 32-inch ladder bars and Aldan springs in the rear.

It is finished in a beautiful gloss black both inside and out, with the exception of the brownish red heavyweight leather seats that have been hand tooled, dyed and pinstriped. They give the interior a great character and invoke a rugged yet elegant, old west feel that is carried down to the same custom floor mats and shifter boot. The dash is finished in a polished aluminum frame, brown leather insert and topped off with Classic Instruments gauges. Virtually everything from the engine bay to the fuel tanks and the underside is either painted to match the car, chromed or polished and still remains in excellent show condition.

The custom offered here presents a very rare opportunity to own a recently finished custom hot rod that has had limited show engagements and has already garnered the respect of enthusiasts nationwide. When Jim Benitez first started building this pickup almost seven years ago, he set out to create one of the coolest customs in the last few years. Jim not only surpassed those expectations, he arguably created one of the finest custom 1930 Ford Roadster Pickups in existence today. “Faster Pussycat” remains in exceptional show condition, still fully detailed and rarely driven, and it provides the new owner a wide variety of options for shows, tours or concours events, where it is sure to garner even more attention and awards.

Please get in touch with us at mail@kustomrama.com if you have additional information or photos to share about Jim Benitez' 1930 Ford.