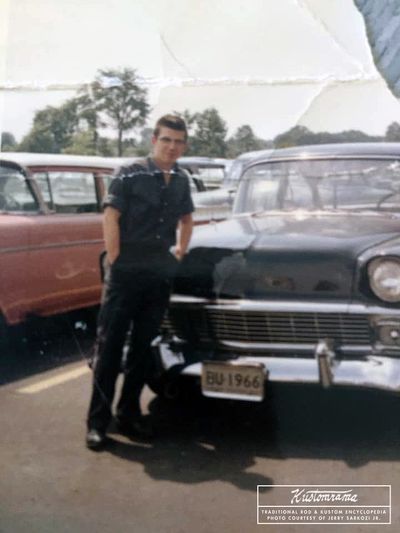 A photo of Jerry with his mild custom in 1958. He bought the car brand new in 1956. He ordered a 225 horsepower 265 Chevrolet V-8 engine with 3 on the three and dual quads, so he had to wait 6 months for the car to finally arrive. Photo courtesy of Jerry Sarkozi Jr. 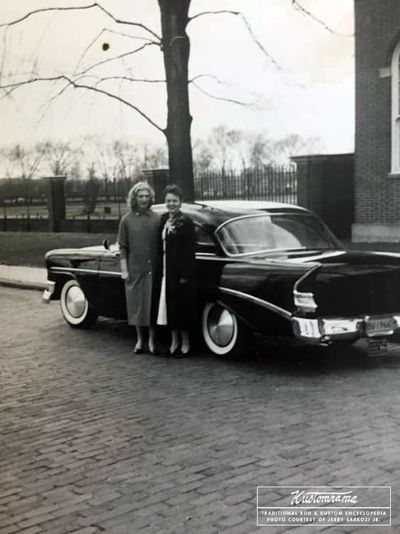 A photo of Jerry's Chevrolet as it appeared it had been rear-ended, repaired and restyled. Photo courtesy of Jerry Sarkozi Jr. 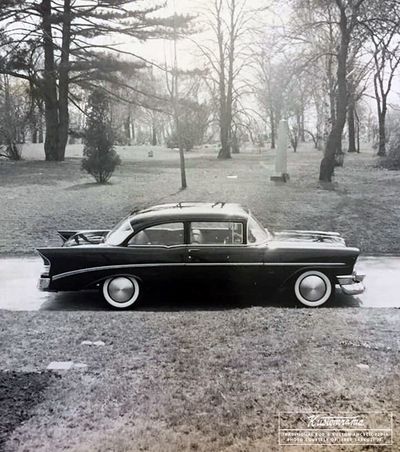 A photo of the car developed in April of 1958. This iteration of the was shown at the 1958 Detroit Autorama. Photo courtesy of Jerry Sarkozi Jr. 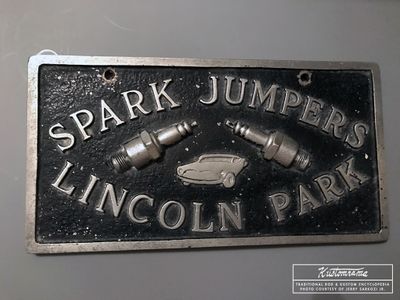 Jerry's old Spark Jumpers of Lincoln Park car club plaque. Jerry Jr. is the caretaker of the plaque today, and he wants to one day run it on his 1956 Studebaker shortbed. Photo courtesy of Jerry Sarkozi Jr.

1956 Chevrolet Delray owned by Jerry Sarkozi of Lincoln Park, Michigan. Jerry was a member of the Spark Jumpers of Lincoln Park car club, and in 2019 his son, Jerry Sarkozi Jr., told Sondre Kvipt of Kustomrama that his dad bought the car brand new. "He saved up and special ordered his 56 Delray." Jerry ordered a 225 horsepower 265 Chevrolet V-8 engine with 3 on the three and dual quads, so he had to wait 6 months for the car to finally arrive.[1]

Unfortunately, the Chevy was rear-ended in 1956, shortly after Jerry received it. "They put a new right quarter panel on the car and proceeded to nose, deck, remove the handles, and put 1956 Packard taillights on it," Jerry Jr. recalled. The lead work was done by a fellow named Ed. The car was dressed up with full Moon discs and wide whitewall tires, and in 1958 Jerry showed it at the Detroit Autorama 1958.[1]

Jerry Jr. remembered that his dad used to winter store the car. He was born in 1961, and he used to stand on the seat, drinking his bottle and point at the hot rods as they cruised a local place called Friscos. "My youngest recollection is I was sitting in the front seat and said to my dad, "what kind of car is in front of us?" He said a 66 GTO." Jerry told his dad that he liked the taillights and that he wanted to have a car like that. Jerry went on to have a 1965 Pontiac GTO.[1]

Around 1967 or so Jerry sold the car to a friend os his known as "Big Mike." Jerry Jr. has memories of riding in the car with "Big Mike," "I remember it had a super cool floor shifter in it then," he told Sondre.[1]

In 2019 there were just memories and a handful of photos left of the old custom. Jerry doesn't know how long "Big Mike" had the car. "I've been looking at every '56 I've seen since the 1970s, trying to find my dad's car!" Do you know what happened to it? Please get in touch with Kustomrama at mail@kustomrama.com if you have seen a 1956 Chevrolet with Packard taillights lately.[1]

Please get in touch with us at mail@kustomrama.com if you have additional information or photos to share about Jerry Sarkozi's 1956 Chevrolet.