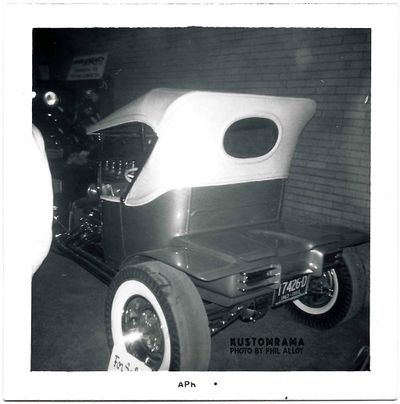 A rear end shot of the Trojan at an indoor car show in Toledo in 1965. Photo from the Phil Alloy Photo Collection. 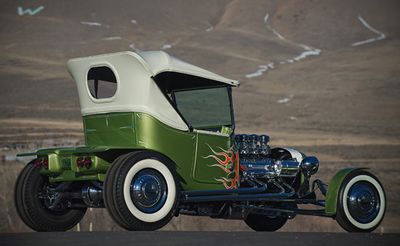 1916 Ford Model T owned and built by Pharaohs member Harry Markiecki of Toledo, Ohio. Harry built the car in 1961, and it went on to win numerous shows and awards after one year of work and a $3,000 investment. He did all the work himself, except for the upholstery and paint, which were outsourced to local craftsmen in Toledo. The Trojan graced the covers of multiple magazines after its completion, with Hot Rod calling it a “Space Age ‘T’” and proclaiming, “Harry Markiecki’s updated 1916 Ford missile has conquered 18 trophies in 7 showings, including 6 Best of Shows”.

By 1971, the Trojan had been acquired by Chester Cary of Lima, Ohio and was ultimately purchased in 2006 from Mike Guffey, before being treated to a comprehensive, nut-and-bolt restoration at Flying A Garage in Winnemucca, Nevada.

Mark Moriarity assisted in locating period photos, primarily an article in Rodding & Re-Styling (May 1962), a piece in Car Craft (December 1961) and another feature in Showtime. Dave Bengochea, Parker Arrien and Ken Lutzow of Flying A Garage conducted the restoration and were joined by Dale Weber of Sparks, Nevada, who did the impressive pin-striping. Martinez Custom Upholstery of Burbank, California was commissioned for the interior and top work and the extensive chrome plating was conducted by Advanced Plating of Nashville, Tennessee.

As they began the tear-down process, they discovered the original color under the dash and it became quite apparent that, despite the car’s rough condition, it was highly original, from the body and engine to the interior and frame – virtually everything was precisely as Markiecki built it over four decades earlier. Following completion, “Trojan” was invited to the Detroit Autorama in 2009 by editor Brian Brenna, where it was displayed alongside the Orbitron, Outlaw, Dream Rod and other famous historic show rods. Harry Markiecki’s son, wife and daughter all made the trip to Detroit as well and were overcome with emotion to see Harry’s prized hot rod brought back to life. The original pin-striper and Bob Hogg, the original painter, were also in attendance. In fact, “Trojan” has continued its winning ways with a Best in Class award at the 2009 Detroit Autorama, “Terrific T” and Excellence Awards at Del Mar, and another first in class and “outstanding detail” award in Boise.

The recently completed restoration is show quality in every respect, true to Markiecki’s original vision. The 322 cubic inch Buick Nailhead is topped by a Weiand Drag Star intake manifold with six Stromberg 94s, mated to a Dynaflow transmission. The body is correctly finished in Lime Fire metallic green with black and white pin-striping and the traditional period yellow/orange flames. The rear deck is particularly interesting as it showcases Markiecki’s metal working abilities with the fusion of a ’58 Ford decklid and a’59 Chevy hood, which was used to create the fenders. The taillights are from a ’58 Impala and the chromed headlights are off a tractor. Other notable features include a cut-down ’32 grille shell, white overstuffed Naugahyde upholstery with a matching folding top. Black painted steelies sit at all four corners with Lancer hubcaps, Firestone tires in front and Hurst slicks in back. The chrome is certainly one of the most impressive aspects, as it graces everything from the engine compartment to the banjo rear end. The overall presentation and quality is nothing short of stunning.

In addition to period photography and extensive receipts, “Trojan” also comes with a restoration binder, documenting the build in photographic detail. This is certainly a fascinating period hot rod with countless awards and honors to its credit. In fact, it is even featured as the cover car in the October 2009 issue of Rod & Custom with a six-page story to complement its numerous recent awards.[1]

Please get in touch with us at mail@kustomrama.com if you have additional information or photos to share about Harry Markiecki's 1916 Ford.