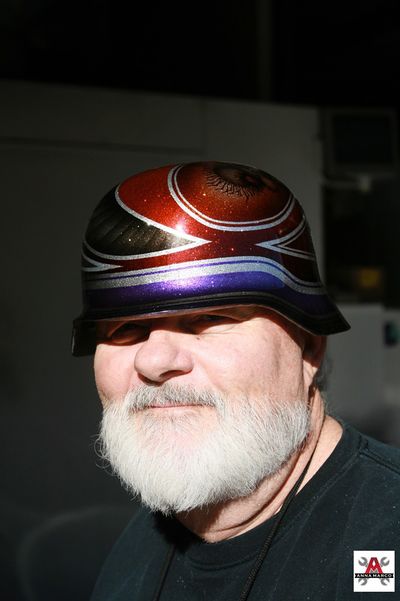 Wild Bill Carter's life was a long colorful road from that first 1956 Buick started in high school and striped in the garage to Shirley Muldowney’s “pu**y pink” racecars. Photo by Anna Marco (c) 2019. 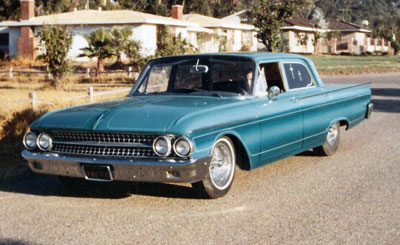 Jim Robertson's 1961 Ford of Simi Valley, California. Jim's Ford was restyled in 1969, and it featured a fadeaway paint job by Bill and pinstriping by Walt Prey.

Rudy and Linda Reyes' 1965 Chevrolet Impala was painted by Bill and pinstriped by Walt Prey at Carter Pro Paint. 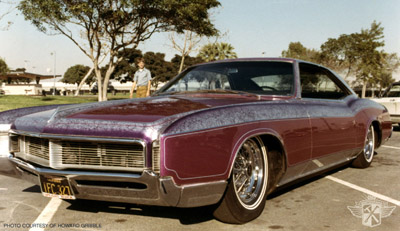 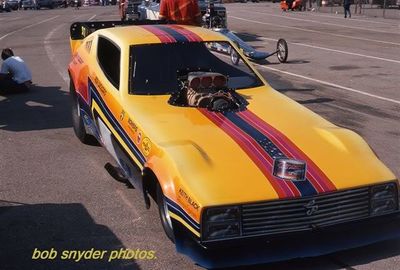 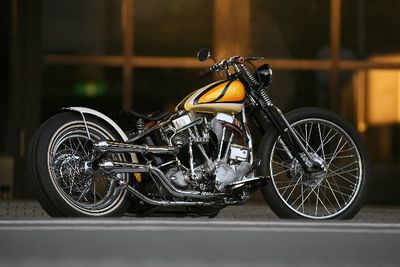 A bike that Bill painted for Cole Foster. Photo courtesy of the Bill Carter estate. 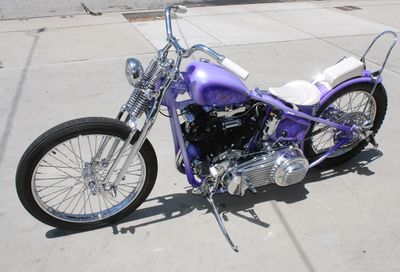 A bike that Bill painted for Brent Rodgers. Photo courtesy of Anna Marco. 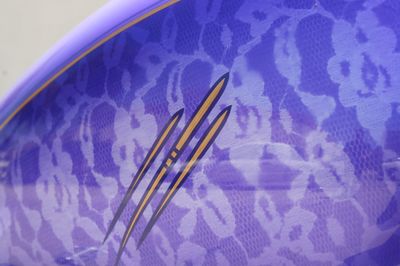 A close-up of the tank on Brent Rodgers' bike. Photo courtesy of Anna Marco. 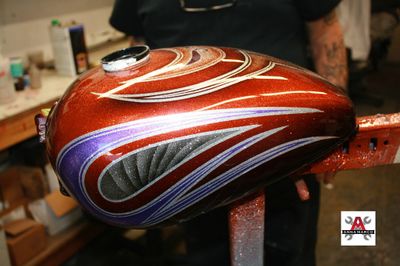 A Carter painted tank from the collection of the Byrd family. Photo by Anna Marco (c) 2019. 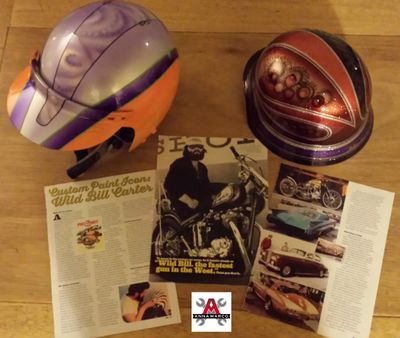 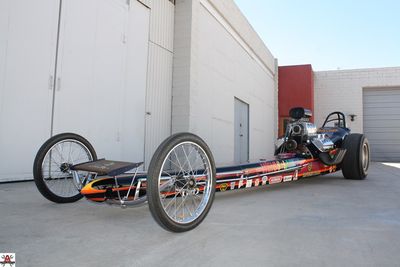 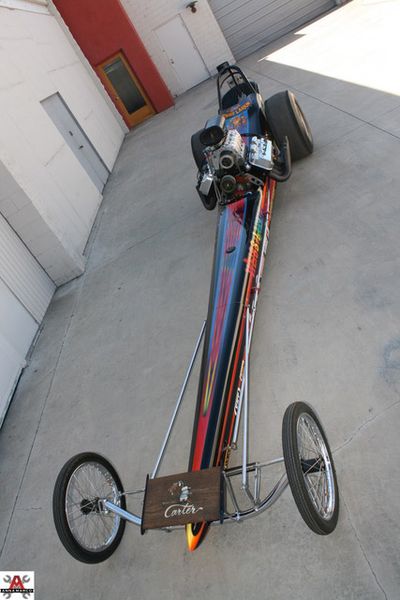 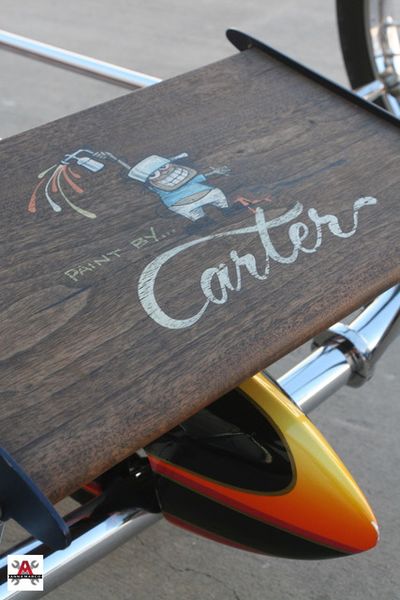 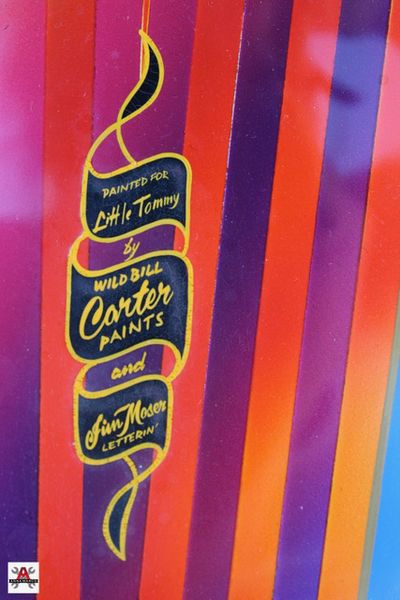 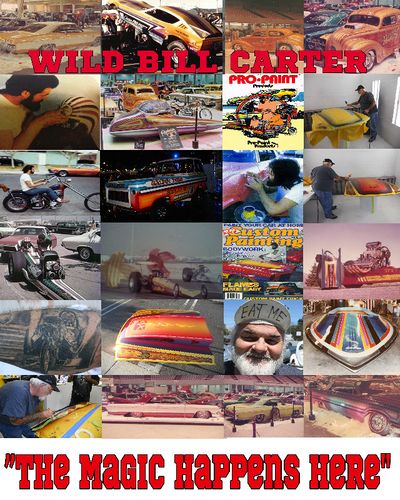 A show board by Anna Marco. This was used to promote Bill at the 2017 Grand National Roadster Show. Photo courtesy of Anna Marco (c) 2019.

Story by Anna Marco - All Rights Reserved. Used with permission.

As colorful as the notorious namesake of western lore, custom car painter/biker/drag racer/apprentice of Larry Watson… Wild Bill Carter had an exciting and illustrious career. To many in the custom car scene he is known as “Wild Bill” The fastest gun in the West. Paint gun that is. Bill has applied an endless list of color schemes to various car canvases including dragsters/racecars/planes/custom bikes/custom boats/exotic cars and more. He has rubbed shoulders with famed racers and actors along the way such as James Garner, Dan Haggerty, Chuck Connors, Don Prudhomme and the prankster of drag racing, TV Tommy Ivo. To say Bill Carter has “influenced” the lowrider scene, motorcycle circuit, and drag races with his creativity is a gross understatement. This man is a master of his craft, an icon and a custom paint legend.[1]

Bill was born in Hollywood, California and grew up during the birth of custom paint. It was a magical time of experimentation, groundbreaking designs, custom formulas and color combinations. He started in high school recalling, “I loved the smell of paint and lacquer.” One of his first paint jobs was Pearl White/Purple flames on a stock 1929 Ford Model A with a dropped axle that belonged to a family member. He then proceeded to paint vehicles for his father's trucking firm. Bill’s father was very supportive of his son and encouraged him to paint everything. After watching $5 sign painters, Bill decided to do that too and thus began his foray into striping and lettering.[1]

At age 23, Bill Carter became Larry Watson’s protégé and he was the only person who could mix, match and recall the secret, original Watson paint/color/formula combinations. Watson had opened up shop in the Valley and heard of Carter’s “badass paint jobs” so he called Billy and hired him on the spot. Carter quips, “I always wanted to work for him but would never ask. He heard about me!” Watson was a tough taskmaster in the shop but with his guidance, Bill learned valuable lessons regarding professionalism, trusting your instincts and honing your creative eye stating, “You either have it or you don’t. Watson was fast and innovative and he taught me skills in the paint booth, secret tricks and how to complete jobs efficiently. We would mix five-gallon buckets of paint and still have enough left over for the doorjambs. My Watson tutelage exposed me to color in a new way and I took that to drag racing combined with chrome tape, pearls and candies. In addition to being inspired by Watson whom he affectionately called “Leader,” Bill Carter called Leadslinger Bill Hines, “miraculous.”[1]

Back in the day, Bill had to paint and stripe everything from the simplest project to the most complex: ”meaning as complex as you wanted it.” He was repeatedly called to restore and/or repaint vehicles he originally worked on such as The Orbitron (alongside Larry Watson) and Dick Harding’s The Backup Pickup Wheelstander Ford Econoline (with driver George Tuers), both of which are now owned by Galpin Motorsports. Other projects included bikes for Cole Foster (Salinas Boys), Ferraris, Funny Cars and custom jobs for private clientele. Carter Pro Paint was a busy custom paint shop operated by Bill in the 1960s and with his own line of commercially available paint product. He still calls his custom mixes “Billy Brew” and once painted so many bikes that they were parked in a production line with friends joking “he is the fastest (paint) gun in the West." The shop was located at Burbank Blvd. in Van Nuys, California where legendary painter/stripers Walt Prey (he painted the famed Gypsy Rose lowrider) and Mario Gomez (Candy Factory/lowrider fame/Lifestyles CC) worked under Bill’s guidance. There, fantastic creations were born as seen on Rudy & Linda Reyes’ 1965 Chevrolet Impala (purple lace/pearl/candy) and Howard Gribble’s 1969 Buick Riviera (Candy Burgundy flake with veiling.) Bill called custom auto painter, Pete Santini “ a good friend."[1]

When it comes to drag racing, Bill was hooked stating, “It’s the only place I want to be. Dragsters are poetic in the way they dance down the strip.” He received his NHRA fuel dragster license in George "The Stone Age Man" Hutcheson’s racecar in 1968-69 at San Fernando Valley Raceway and powered that car right off the back end of the track. He also drove for many top teams including Dan Haggerty’s (Grizzly Adams TV fame) who became a lifelong friend. In 1979, Bill was racing and helming his own team and winning “Best Appearing Car” at the 1979 Winter Nationals. When not driving racecars, he was painting famous ones for Shirley Muldowney, Ed McCullough, Mondello-Matsubara, Tony Nancy, Tommy Larkin, Don Prudhomme (Skoal Bandit/Snake & Mongoose), Pennzoil’s Chaparral cars (Jim Hull) and Joe Paisano’s “Paisano” funny car for Venolia Pistons. He restored paint for The Stone Age Man and The Iron Horse stating, “I am particular about which car to paint. You have to have respect for it. I got my nickname painting and driving drag cars. Watson said, “You are wild, Bill! You crazy Mofo… painting those... and then driving them!” It was Bill who took custom automotive paint tricks and Watson style paint jobs and brought them to the dragstrip. He recalled a favorite paint job he did was on his own race car.[1]

Wild Bill called all his paint jobs, Works of art. They are a combination of custom paint blends, art techniques and commercialism while using product names. The consistency of paint is important in striping; the flow from the amount of paint on brush is key. With overlays, pearl bases and candy jobs, color arrangement is paramount on custom paint schemes. He ran the gamut from restoring Ferraris to a field of racecars and more claiming, “I get bored easily so I painted everything and knew everyone. You could live to be 100 and not have the resume I do.” Meanwhile, Wild Bill is opinionated as they come and retains his warped sense of humor. His phonebook is the “Who’s’ Who” of the automotive world. To have anything painted by him is to reach the pinnacle of automotive art acquisition. When asked the secret to painting a good lace job he jokes, “Go to the Candy Kat, get a wet panty from a stripper and stick it to the tank.”[1]

Bill was as famous for his signature use of colors as was Larry Watson claiming, “there is White and then there is Bone Pearl White. It makes a difference how you use it. Color is the frosting on the cake. You can overdo it. Don’t put all your tricks on one car. Paint tells a story, it’s like dressing a woman.” He resolved many tech issues of paint application including modern waterborne formulas, which are unforgiving to mistakes. Although he favoured earth colors, he always ended up using Magenta. He had painted so many cars that he could measure paint by eye and its consistency by the drip factor recalling, “Gene Winfield does that too. How it runs off the stick tells ya its right. I loved Nitrocellulose Lacquer. It smelled better, was sweet, I liked it and got inspired. It had transparency. Today paint is not the same, Don’t smell it… but I love color!” Bill has won dozens of awards for Best Paint and Best Use of Color and is a legend in the automotive industry.[1]

For Wild Bill Carter, his life was a long colorful road from that first 1956 Buick started in high school and striped in the garage to Shirley Muldowney’s “pu**y pink” racecars. Famous last words, “Striping is an integral part of a paint job. You need the right colors; it can make or break a final paint scheme. Don’t f**k it up. The End.” Good advice from the man who broke the mold in the custom paint industry.[1]

Bill is survived by his wife Linda and sons. He passed May 31, 2019. "Bill was a genius with paint," Anna Marco told Sondre Kvipt of Kustomrama in 2019. "He could paint a peacock and make it look better. He had a natural eye for color. Aside from being the protege of Larry Watson (because he was that good,) he took custom paint to another level, expanded its sphere of influence commercially and redefined paint jobs in dragracing. He is one of the few great automotive painters in the world who defined the Golden Age of custom paint. Unfortunately we lost Watson's secret paint tricks and recipes too. He never wrote them down and Bill committed them to memory. It's the end of an era. I'm heartbroken. He was dearly loved by many but will continue to inspire the next generation of car painters and that's how his legacy lives on. His life was as colorful as the projects he painted. He was one of a kind. I am blessed to have called him my friend."[1]

Please get in touch with us at mail@kustomrama.com if you have additional information or photos to share about Bill Carter.